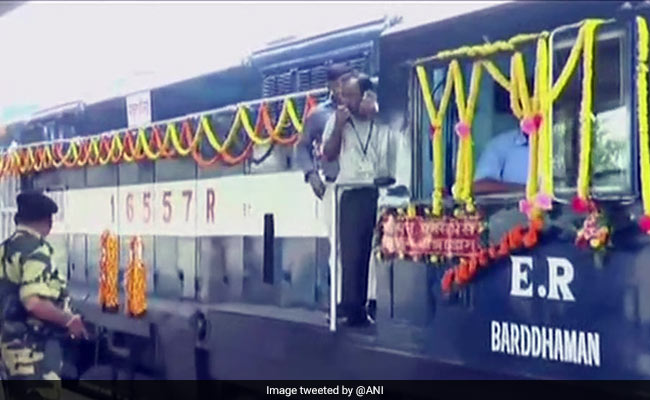 Kolkata / Dhaka: A number of connectivity projects, including a new passenger train service between Kolkata and Bangladesh’s southwestern industrial city of Khulna, were today launched by Prime Minister Narendra Modi and his Bangladeshi counterpart Sheikh Hasina that will help reduce the travel time by three hours.

These projects also include the second Bhairab and Titas railway bridges built at the cost of $100 million; and the International Rail Passenger Terminus at Chitpur in Kolkata.
The two leaders through video conferencing flagged off the inaugural run of the Bandhan Express, a fully air-conditioned weekly passenger train service, between Kolkata and Khulna.

On the occasion, Prime Minister Modi said the ties of friendship between India and Bangladesh have further strengthened.

“The most important dimension of the connectivity is the people-to-people linkage,” Prime Minister Modi said.

“The inauguration of the international passenger terminus will benefit passengers of the Kolkata-Dhaka Maitri Express and Kolkata-Khulna Bandhan Express. It will not only help them in customs and immigration but also save three hours of their travel time. The two rail services are named according to our shared vision,” he said.

He said India was proud to be a reliable partner in Bangladesh’s development.

“I am happy to know that work is in progress in our USD 8 billion concessional finance commitment. Development and connectivity are interconnected and we have taken steps to strengthen the decades-old historical links specially between the people of West Bengal and Bangladesh,” PM Modi said.
Prime Minister Modi said he believed that the two nations will touch the new heights in development and prosperity as they strengthen ties and relations between the people.

Prime Minister Hasina said, “Today is a great day for relations between the two countries with the inauguration of the train services and the two bridges. This train service is a dream come true for people on both sides of the border.”

She said her country wanted collaborative engagements with India and other neighbours for regional peace and prosperity.

“We want to cooperate with India and other countries in the immediate neighbourhood for creating an area of peace in South Asia where we can live as good neighbours and pursue constructive policies for our peoples benefit,” she said.

Chief Minister Mamata Banerjee described the launch of the projects as a remarkable day for India and Bangladesh.

“The relations between the two countries will strengthen in the future,” she said.