In 3 years there will be no unmanned railway crossing: Suresh Prabhu

Jun 27, 2017 Posted by Indian Railways Updates Indian Raliways News Comments Off on In 3 years there will be no unmanned railway crossing: Suresh Prabhu 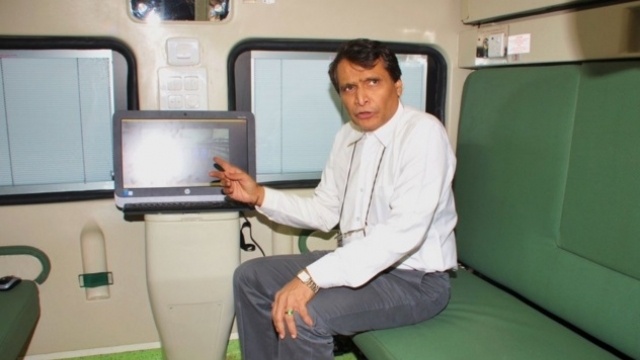 Speaking exclusively to DNA, Railway Minister Suresh Prabhu said that his ministry intends to do away with unmanned railway crossings in the next 3 years. Large number of casualties take place at unmanned crossings every year, hence it remains a major cause of concern for the railways.

Prabhu also said that since railways in recent times have become a target for sabotage, they have established a forensic wing to collect sufficient evidence. To minimise number of accidents, anti-collision devices are being installed, said Union Rail Minister. Presently, Indian railways carry 22.1 million passengers every day and in 2016 ferried 8.1 billion in the country, a record in its own.

On the issue of safety, Suresh Prabhu said that 40,000 coaches are being retrofitted by new coupling devices so that trains don’t get derailed. Railways intend to meet its target in next 5 years. Suresh Prabhu also told DNA that India will see bullet trains run by 2023 between Ahemdabad and Mumbai but the project may be completed one year early, according to him.

Regarding railway connectivity with neighbouring countries, Prabhu said, “We want to connect Indian peninsula with Myanmar and Nepal and the process is in place”. About fighting legacy issues, Suresh Prabhu said that it is a long struggle. “When I took over , I inherited issues related to infrastructure, organisation and finance. I depoliticised these issues and resolved them. There was lack of transparency and finance was in bad shape,” said Rail Minister. Prabhu added that he is hoping for railways to have line to more credit to brighten its finances. “It is for number of reasons when I took over, I didn’t announce new projects. In fact, I have implemented projects conceived and announced by my predecessors as I wanted promise to match execution,” said Railway Minister.

Suresh Prabhu said that currently the focus is also on conservation of environment and through number of initiatives railways will save Rs 300 crore. He particularly stressed on recycling of water used by the railways daily.

In the end when asked as to why political narrative of cow vigilantism and Kashmir is dominating discourse around the government, he said,” I request everyone to evaluate us on the work we have done. This is a distraction and it has to be done away. Prime Minister Narendra Modi has spoken about these issues many times.”