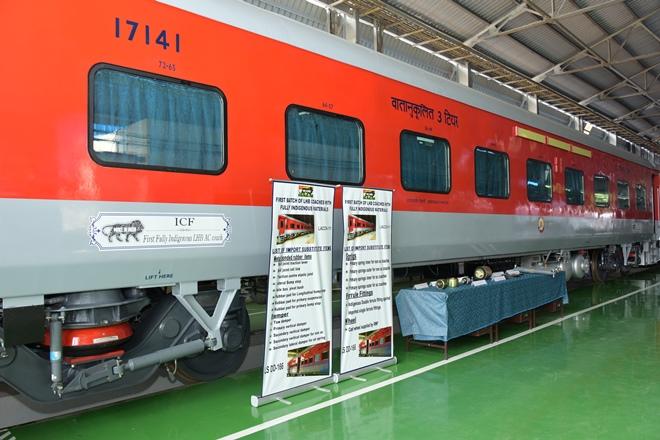 The Integral Coach Factory (ICF), Chennai, a premium railway production unit here, has rolled out the first indigenously manufactured Linke Hoffman Busch (LHB) coach. The technology for these coaches was acquired in 1995 by railways from Linke-Hofmann-Busch, a German company.

Although, ICF produced its first LHB coach in 2013, it was manufactured using imported materials. Over the years, the factory has been gradually reducing its import requirement with locally made substitutes. As the final step, the import of under-carriage materials has now been stopped. “We have thus been able to reduce the cost by around Rs.2.25 lakh per coach,” said a factory official.

At present, each LHB coach costs Rs.2.5 crore, which is estimated to be less than half of its original import cost.

The ICF General Manager Sudhanshu Mani inspected two LHB coaches with 100 per cent indigenous content, one a three-tier AC coach and the other a second sleeper compartment. These two coaches, he said, were to promote ‘Make in India’ efforts.

It has been proved that LHB coaches do not climb over one another during collision or derailment. Faced with a spate of accidents involving conventional coaches, the ministry had decided to replace them with LHB type.

“Coach No. LACCN 111 and LSDD 166 with 100% indigenous content was flagged off after inspection from Member Rolling Stock of the Railway Board,” an ICF official told FE Online. Out of the two ‘Make in India’ coaches that have been rolled out by ICF, the non-AC one has 100% indigenous components. The AC coach has one imported component. “The non-AC coaches are fitted with wheel disc manufactured at Rail Wheel Factory at Bangalore. The AC coach has an imported wheel that has been assembled at ICF with some value added component,” the ICF official said.

Given the spate of rail accidents over the last year, Indian Railways has decided to stop production of traditional ICF coaches in 2017. Now, ICF Chennai will make only LHB coaches. LHB coaches boast of stainless steel bodies and have anti-climbing features. This ensures that in case of a derailment, the coaches do not pile onto each other, hence making them safer. The LHB coaches also have a graduated release modular braking system the axle mounted disc brakes.

But, will all of them be 100% ‘Make in India’? Not yet, that’s a gradual process, says the ICF official. “We have been asked to almost double our production of LHB coaches, so 100% ‘Make in India’ will take some time to be absorbed completely,” he says, adding that focus is on meeting the twin goals of safety and ‘Make in India’.