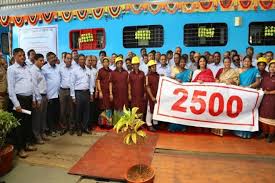 Integral Coach Factory (ICF) in Chennai has created a new manufacturing record by making over 2,500 coaches in the financial year 2017-18. Not only that, the factory has crossed another milestone in the production history of Indian Railways. ICF Chennai surpassed the target of 2,464 coaches, which was fixed by Railway Board and made a record out-turn of 2,503 coaches. Moreover, 73 per cent of the total production were stainless steel coaches.

According to a press release by ICF, the product mix consists of electric multiple units (EMU) for Mumbai as well as for Chennai, diesel-electric multiple units (DEMU) for Jammu and Kashmir, SPART, DETC, Kolkata Metro, Vistadome tourist coaches for IRCTC, Military Langer etc. Last year, the factory had turned out 2,277 coaches. Few days ago, the 2500th coach was flagged off at Furnishing Division by two senior most employees C. Bakthavatchalam and Shri V. Rajagopal, in presence of General Manager, S. Mani along with other officials of ICF.

In order to make Indian Railways, the safest mode of transport, Railway Minister Piyush Goyal recently said that ICF has almost tripled the production of Linke-Hoffman-Busch (LHB) coaches. He also said that the LHB coaches are comparatively safer and withstand accidents better with minimum calamities. The number of LHB coaches has surpassed to 1,100 in 2017-18 from 400 in 2016-17.

In addition to LHB coaches, the ICF will also manufacture ‘Make in India’ train sets- Train 18 and Train 20. With the manufacturing of Train 18 and Train 20, there will be a boost in the coach factory, according to ICF, Chennai. The development of Train 18 has started and the new self-propelled semi-high speed train set will be rolled out in June 2018.. It will have 16 coaches and will be fully air-conditioned. The train will run at a speed of 160 kmph and will consist of modular toilets, plush interiors, diffused lighting, automatic plug doors along with other modern features.