Huge investments made in Railways in the last 3 years will lead to Development: Piyush Goyal

Sep 18, 2017 Posted by Indian Railways Updates Indian Raliways News Comments Off on Huge investments made in Railways in the last 3 years will lead to Development: Piyush Goyal 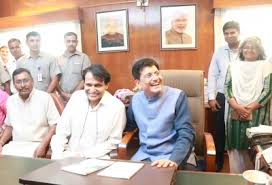 Piyush Goyal, who on Monday took office as Railway Minister, said that huge investments made in the railways in last three years will definitely lead to the development.

“Huge investments in railways have been made in past three years, which will definitely lead to its development,” he said after taking charge in the Rail Bhavan.

He also said that Indian Railways will continue on the roadmap of development.

Appreciating the the efforts put in by his predecessor Suresh Prabhu, Goyal said: “Now people talk about ministers working 24×7. But I have seen Prabhu working like that 15 years ago.”

He also described Prabhu as his elder brother and said that it is an emotional moment for him as “Prabhu is my mentor”.

“He has been mentoring me for over 20 years. He (Prabhu) has worked with my father in Atal Bihari Vajpayee government,” he said. Goyal’s father had been Power Minister then.

He also said that he has got time to work under Prabhu.

Meanwhile, Prabhu, who was also present to handover the charge of office to Goyal described him as his younger brother.

“Goyalji is like my younger brother and now he will take over as new Railway Minister.
“I am confident that he would contribute to the development of the nation,” he said.

Goyal was on Sunday given charge of the Railway Ministry, replacing Prabhu, who shifts to Commerce and Industry that was with Nirmala Sitharaman, who has now become India’s first, full-fledged Defence Minister.