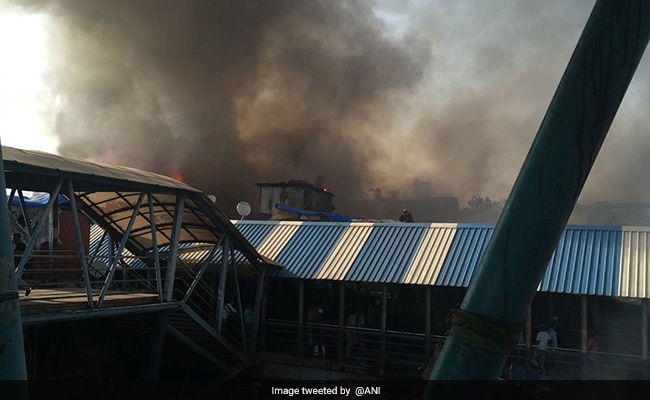 The fire is now under control.

Four persons who are residents of the Behrampada slum, were injured in the fire that broke out at the slum near Bandra railway station.

A fire fighter was also injured.

A part of a sky-walk near the eastern exit of Bandra station collapsed after it caught fire.

The fire in Bandra is now under control. Although, the harbour line connecting Wadala and Andheri is still closed.

According to the Western Railways PRO, “The fire which reached Bandra station has not affected train services.” The sky walk on the east side of Bandra station is completely out of bounds.

The fire in Behrampada slum started at around 3.45 PM.

According to Mid-Day, one firefighter was injured in the fire. Mid-Day also says that gas cylinders exploded during a huge demolition drive carried out in the slum this afternoon.

According to news agency PTI, the Chief PRO of the Central Railway has said, “We have stopped Harbour line up and down services from 4.25 pm as a precautionary measure owing to fire near the Bandra station on the east side.”

The fire had started in Behrampada Slum in Bandra East. The slum is near Bandra station.

The skywalk which connects Bandra East to Bandra station is on fire.

Trains from the Andheri-Wadala stretch of the Harbour line, which is one of the city’s three main local lines, have been stopped. This is because the fire is allegedly close to the railway tracks.

A fire which broke out from a slum near Bandra station has engulfed an overhead pedestrian bridge at Bandra station. This has happened during rush hour at the station.

Major train lines have been shut due to the fire. 16 fire engines and around 17 water tankers have been rushed to the spot.

The sky is filled with smoke, as of this moment.