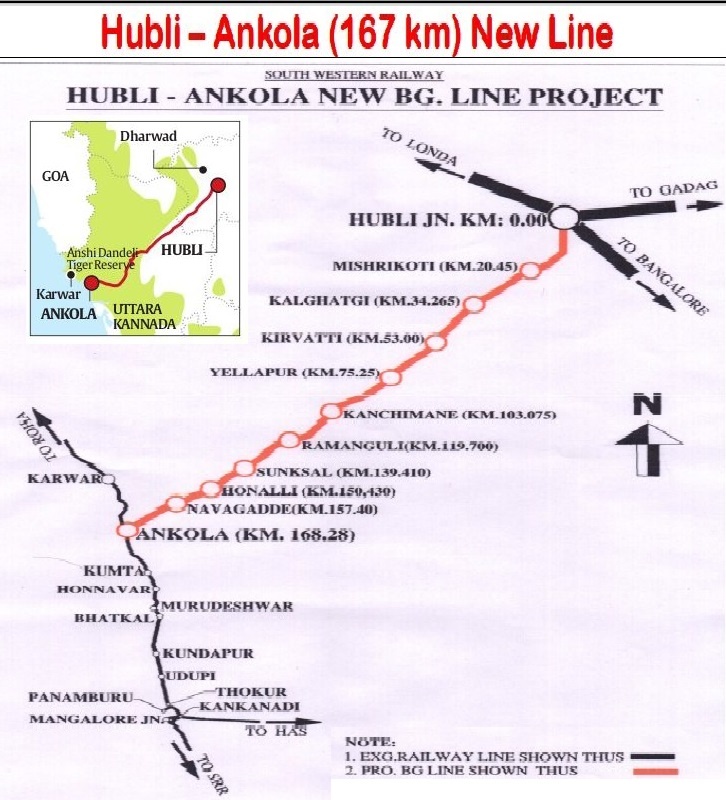 The much-delayed, controversial project to provide a railway line — connecting Hubballi in the plains and Ankola on the coast — that cuts through the dense forests of the Western Ghats has taken its first step towards fruition.

The environmental cost, however, remains high: More than 1.73 lakh trees in 1,472 acres of forests will make way for the railway project, apart from fragmentation of two tiger reserves.

On Monday, the Regional Empowered Committee of the Ministry of Environment, Forests and Climate Change (MoEF&CC) recommended the Stage-1 clearance for the long-pending project, albeit with conditions.

This marks a big step for the project —which was announced in 1997 and foundation stone for which was laid in 1999 — that has seen environmental opposition and even court scrutiny.

Among the conditions mentioned, the REC has asked the Railways to propose an increased number of tunnels. According to the proposal submitted, there will be 34 tunnels and nine stations on the 168.3-km route. Similarly, the committee has asked them to revise the mitigation measures being taken, including construction of underpasses for wildlife.

It was on May 5, during the previous meeting, that the REC claimed they were “not yet convinced” about the need of the project that will cut through “pristine” forests. While environmental hurdles had persisted, the Ministry of Railways and numerous Union Ministers from Karnataka had gone on record stating that the project will proceed at all cost.

The proposal states that the line will handle nearly 27 million tonnes of cargo headed from north Karnataka towards Belekeri, (proposed) Tadri, and Karwar ports in Uttara Kannada as well as the Margao port in Goa which is being expanded to import coal. During the previous meeting, the REC had asked the Railways why the project was needed, considering that National Highway 63 (Ankola to Gooty) runs parallel to this; while, a railway line between Hubballi and Margao via Castle Rock already exists.

“The user agency (Indian Railways) has provided information on the doubts we had, including cost-benefit analysis when compared to other projects already present … It is difficult to mitigate (environment damage) in projects like this, but there is a trade-off so that a long-pending project can come up,” said Jagmohan Sharma, Additional Principal Chief Conservator of Forests (Forest Clearance).

Among the changes that saw the project get clearance is a fresh enumeration of the trees being cut. Previously, the Railways had estimated that 2.02 lakh trees would be felled on the alignment. The fresh figures lowers it to 1.73 lakh trees.

‘Another intrusion into delicate ecosystems’

For environmentalists, the Hubballi–Ankola railway line signifies another infrastructure intrusion into delicate ecosystems when there were less-destructive alternatives present.

K. Ullas Karanth, director for Science-Asia, Wildlife Conservation Society, said, “There are too many of these linear intrusions in the Western Ghats already, with more ideas along the way. I completely oppose these incremental intrusions of having more highways and railway lines passing all along the length.”