Nov 13, 2017 Posted by Indian Railways Updates Indian Raliways News Comments Off on Heritage Steam Engine Runs 2 Km Without Driver Who Had Jumped Off 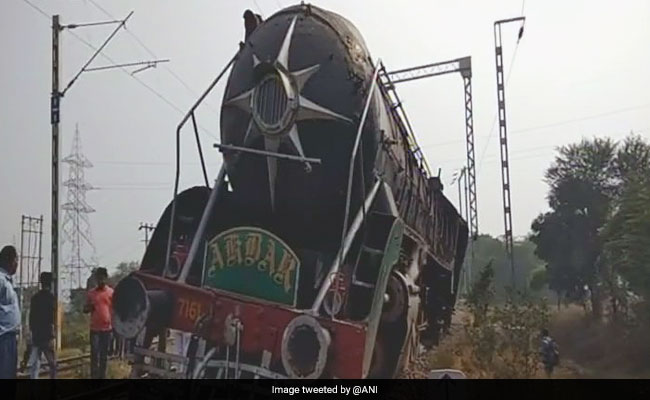 A heritage steam engine named ‘Akbar’, which has featured in over two dozen Bollywood and other movies, was damaged in a derailment after it ran without a pilot in Haryana’s Rewari, a railway official said on Sunday.

The incident occurred at the Heritage Loco Shed in Rewari on Saturday. No one was injured in the episode, said railway officials.
As the 52-year-old Akbar started moving on its own, scared loco pilot Bharatbhushan jumped off as he believed there was a malfunction.

The engine broke the main gate wall of the shed and rolled on for about 2 kilometres towards the main track of the Rewari-Rohtak-Hisar route, before getting derailed just four metres away from it.

“Akbar was brought out of the shed for a trial on Saturday afternoon, two hours before a scheduled inspection by the Executive Director and his team in the day,” said a loco official.

But as Bharatbhushan switched on the ignition, the engine started moving on the tracks on its own.

Bharatbhushan said he had only switched on the ignition and had not pressed the accelerator.

But “it suddenly became uncontrollable and started running on the tracks at a notable speed. I got scared and jumped off the engine. It continued the run for about nearly five minutes, covering around 2 kilometers without me.

“Akbar (WP 1761) has suffered a lot of damage. A crane was called from Delhi to put it back on the tracks,” he added.

The engine was inducted in 1965 after being manufactured at the Chittaranjan locomotive factory in Bengal.

“A large sum of money is spent on its maintenance every year. Now repairs may require a lot more money,” he added.