He Fled From His Abusive Father In Bihar, Made Delhi Railway Platform Home

Jul 11, 2017 Posted by Indian Railways Updates Indian Raliways News Comments Off on He Fled From His Abusive Father In Bihar, Made Delhi Railway Platform Home 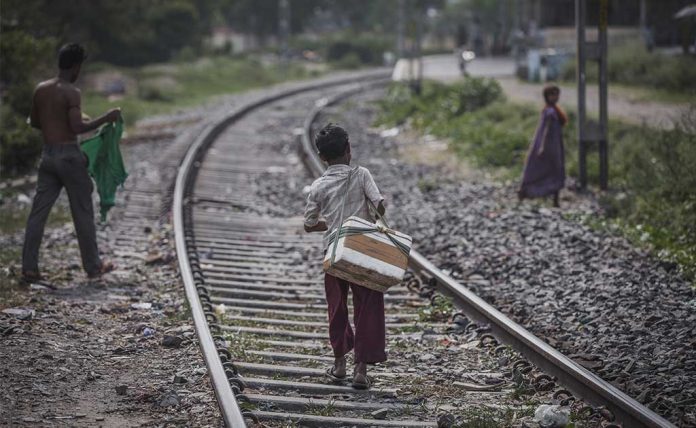 Railway stations always fascinated Rahul Misra. These were the dots that linked the country, the boy from a remote Bihar village would tell himself.

That one such platform would become his home is something that 10-year-old Rahul never imagined. But it did, when he fled from home and his abusive father six weeks ago.

“My father used to beat me and my mother every day. My mother had to even be admitted to a hospital,” Rahul told PTI.

One day, his battered mother, scared that her husband would beat the boy to death, gave him Rs 200 and told him to leave home — and to never return.

He boarded the first train that stopped at the Bihar Sharif station. Its last stop was New Delhi.

Rahul got down at the New Delhi Station (NDLS), and started living there, till social workers found him scrounging for food in the station’s dustbins.

The boy from Pachauri village in Nalanda is one of 600 “railway children” who every month get off a train at NDLS and make the platforms their home.

Delhi’s “railway children” — a name coined by social workers and the Railway Protection Force (RPF) — come from all parts of the country, most fleeing poverty and abuse, but some simply seeking adventure, attracted by the bright lights of a big city.

For many of them, the railway platform is the first stop, and shelter. The RPF and NGOs have set up base at NDLS to zero in on such runaways and ensure that they are not trafficked.

Most of the runaways are boys. The few girls who are found in railway stations are taken to government shelters.

“A shabby appearances, unkempt hair and dried tears are some of the signs of a runaway child. About 15-20 children come to NDLS every day, mostly from Uttar Pradesh and Bihar,” said Pratap Singh, an RPF official at NDLS.

Once such children are identified, their personal details are noted by the RPF personnel and they are sent to child care institutions for counselling. If unwilling to return home, they are taken to government shelters.

According to data compiled by Sathi, between 80,000 and 100,000 children arrive at railway stations every year. Many are reunited with their families.

Rohit Singh, who ran away from home when he was 12 to escape poverty, is one such child taken back to his family. When he reached Delhi recently after leaving Neotni village in Uttar Pradesh’s Unnao District, he tried — in vain — to get in touch with a man who had promised him a job in a factory for Rs 3000 a month.

He went back to the station and started living on a platform, occasionally sleeping in a waiting room, and earning money by scavenging for and reselling plastic bottles.

“I used to get Re 1 for used mineral water bottles and Rs 5 for a sealed bottle,” Rohit said.

But after he contracted dengue, he contacted social workers who had been urging him to join their rehabilitation centre. They helped reunite him with his family on June 27.

Most children are not so lucky. Some are exploited and trafficked and many get addicted to narcotics or alcohol.

“He came from an abusive family where his alcoholic father beat him up. He ran away and started working at a dhaba. But he was made to work for 14-16 hours, beaten up and given leftovers to eat,” said Hashim Khan, a social activist.

So Rupak ran away again, and landed up at NDLS.

“He is addicted to drugs. We are trying to rehabilitate him but there is a long way to go,”
Mr Khan said.

The government has laws supporting children, but enforcing them is not easy because not many are aware of the Acts, the social workers said.

“There are portals such as ‘Track-Child’ and ‘Khoya-Paya’ which help locate missing children but because of lack of awareness, few use them. There is a need to integrate these two portals,” said Rohit Shetti, Advocacy Officer of Sathi.

Mr Shetti added that Childline, a helpline for children in distress, needed a dedicated section for railway children. “These children are at a crossroads and we try our best to keep them on the right path,” he said.

Rahul, who does not wish to go back home, may end up in a government shelter. Till then, the platform will be his home.