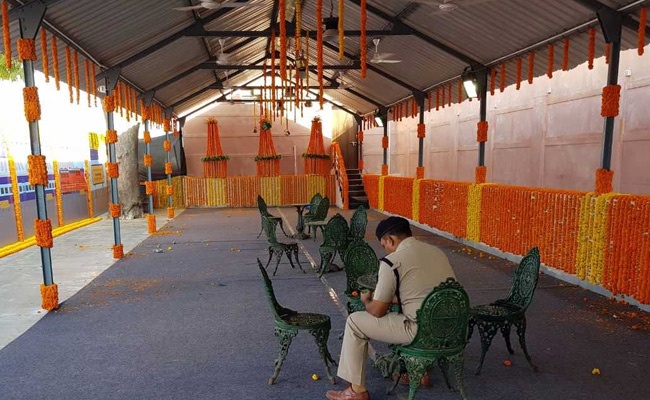 A small dilapidated tea kiosk has now been spruced up and decked up with flowers. Right next to it a small photography exhibition and a coffee shop lookalike have been set up. Welcome to Vadnagar railway station, some 100 kilometres from Ahmedabad.

The reason for this festive look? The man born in Vadnagar and who went on to become the country’s Prime Minister is visiting his hometown for first time after being elected.

While the entire town has got a facelift for Prime Minister Narendra Modi’s visit, the main attraction is the railway station where PM Modi helped his father sell tea when he was a child.

The railway station, till a few months back, was just a small metre gauge station but the work on broad gauge conversion has started. At the platform, ahead of PM Modi’s visit, a photography exhibition giving insight into the life of a young PM Modi when he sold tea has been put up.

Outside the railway station, a chai pe charcha halting point to highlight PM Modi’s campaign with the same name has been set up.

Barely a kilometre away is a multi-speciality hospital which the Prime Minister will inaugurate. It was built at a cost of Rs. 400 crore.

The streets are lined up with hoardings detailing the rise of PM Modi from a child assisting his father to becoming the Prime Minister. PM Modi will hold a roadshow and inaugurate the hospital before addressing a rally.

Yesterday, back in Gujarat where he had laid the foundation stone for the bullet train last month, PM Modi also took a quick swipe at te many critics of the Ahmedabad-Mumbai high-speed train being built.

Speaking at a function to formally dedicate the IIT Gandhinagar building to the nation, PM Modi recalled that he had, as Chief Minister of Gujarat, allotted 400 acres in the state capital for its campus in 2011.

Had this decision to allot land been announced during elections, “some people would have gone all out to criticise me… the way they criticise bullet trains these days”, PM Modi said, suggesting that much of the criticism that he had faced over the high-speed train was linked the Gujarat elections scheduled for last this year.