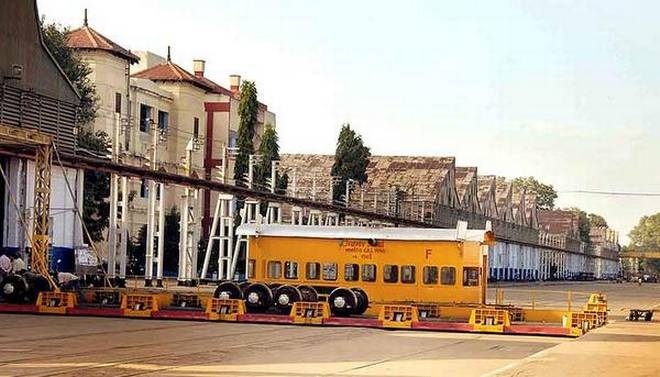 With the railways planning to ramp up production of Linke Hofman Busch (LHB) coaches, the Golden Rock Railway Workshop in Tiruchi is gearing up to carry out periodic overhaul of the coaches when they are sent for servicing.

Engaged in diverse activities, including manufacture of container wagons and POH of diesel locomotives and passenger coaches, this nodal workshop has forwarded a detailed proposal seeking sanction of funds for creation of separate infrastructure facility and procurement of machinery and equipment to overhaul LHB coaches.

Presently, the over 80-year-old workshop established during the colonial era is carrying out periodic overhaul of coaches manufactured at the Integral Coach Factory at Perambur in Chennai.

With increasing number of long distance trains being run with LHB coaches now, the workshop authorities have forwarded a proposal to the Southern Railway headquarters seeking sanction of Rs. 35 crore funds for creation of a dedicated shed and procurement of required equipment to overhaul such type of coaches in the future.

The workshop is awaiting the nod from the Railway Board, New Delhi, for the funds it has sought for setting up the facility to handle LHB coaches, which are longer than the ICF-made coaches with wider bays and doorways.

Ahead of carrying out overhaul of the entire LHB coach, the workshop is gearing up to overhaul bogies of such type of coaches initially possibly from next year, say the workshop authorities.

The new facility is planned to be created in the wake of the proposed move of the railway administration to increase production of LHB coaches keeping in mind the safety features in such coaches, the authorities added.

The workshop has also started overhaul of high horsepower new generation EMD locomotives, which can run up to maximum speed of 140 km per hour. It has transformed from maintenance to manufacturing unit, producing container wagons for the Container Corporation of India, besides manufacturing oil-fired locomotives for the Nilgiri Mountain Railway.