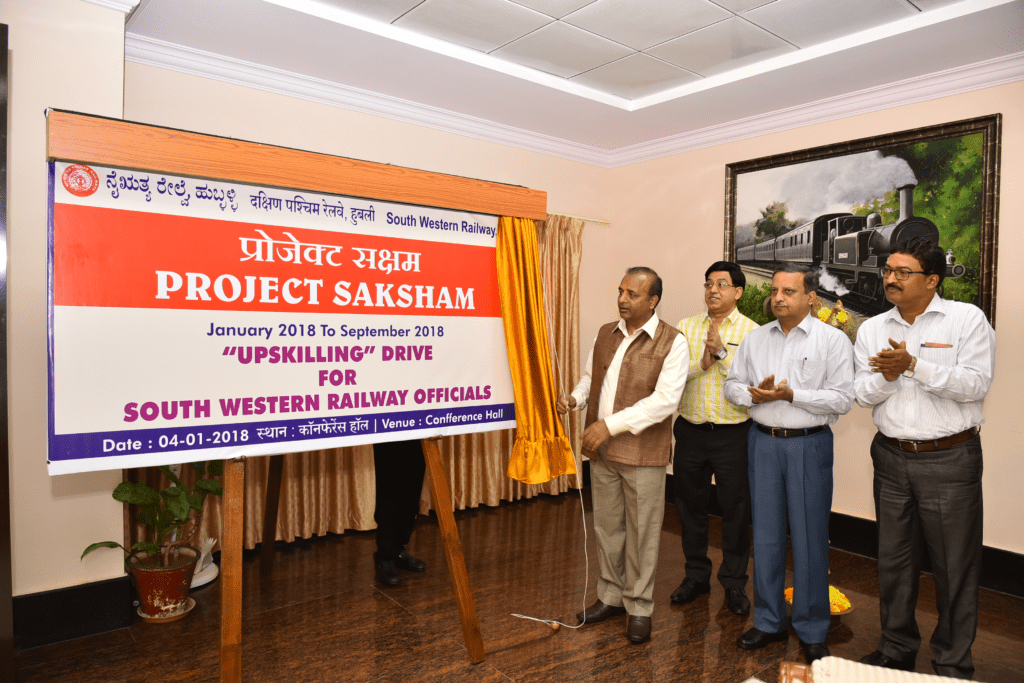 A.K.Gupta, General Manager of South Western Railway launched Project ‘Saksham’ at Hubballi on 04th January, 2018. Project ‘Saksham’ is a concentrated capsule of training for all railway employees in short period of time to boost their productivity and efficiency. South Western Railway is thus one of the first Railways to launch this project as per the directives issued by the Chairman, Railway Board.

In his keynote address, Gupta said Project ‘Saksham’ aims to upgrade the skill sets of the workforce with a single drive spanning nine months i.e. till September, 2018. Under Project ‘Saksham’, all employees in the zone will be put through a week’s training in skills and knowledge relevant to their work area. It will be a five day on the job or classroom training in Railway Training centres, depending on the nature of their employment. The nature of short-duration training will range from refresher course, with an eye on evolved global practices in respective areas, to skill in existing line of functioning. Employees from the rank of a peon to higher echelons will undergo the training. The programme will be of immense help to all Railwayman in their endeavour to perform better.

The event was attended by B.B.Singh, Additional General Manager, S.K.Albela, Principal Chief Personnel Officer, P.A.Lamghare, Principal Chief Mechanical Engineer, John Prasad, Principal Chief Operational Manager, U.S.S. Yadav, Principal Chief Engineer, the Personnel officers from Bengaluru, Mysuru and Training managers of all departments. Mrs. Beulah Sam Rachel, who is the head of department at Global college of Business administration, IT & Commerce, Hubballi gave a Talk on the “Managerial requisites” on this occasion. Under this project, needs of all the railway staff have been identified and a planned training calendar is prepared so as to complete the training requirements of all the staff over the entire South Western Railway in 9 months. Thus about 2 lakh training days has been planned for officials of all ranks and file, spread over the project duration. All the 9 training centers of South Western Railway as well as on the job training will be used for this. The tag line of project ‘Saksham’ at South Western Railway is Excellence through ‘Saksham’.

Further, e-links on Railway works for learning resources was also inaugurated. Various innovative ways of adopting learning were duly emphasized on this occasion.