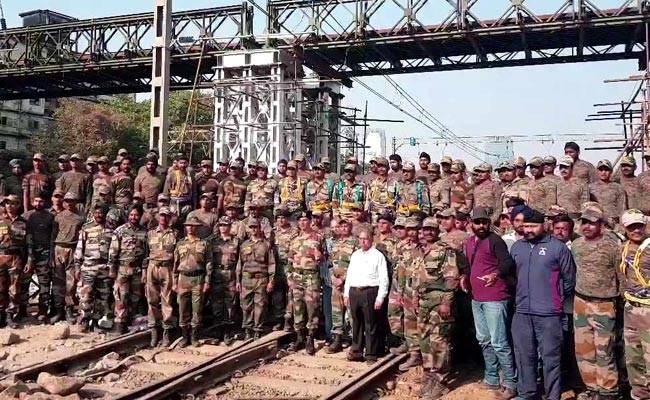 The army, which was brought in last year to build three foot over-bridges in Mumbai, had drawn on its resources stocked near the Indo-China border, a senior army officer overseeing the project has said. The project will miss its January 31 deadline by a fortnight because of gaps in coordination with the railways in the early days of the project.

The government had turned to the army for the new bridges after a deadly stampede broke out on September 29 when an unusually large crowd tried to cross the old, narrow bridge connecting two of the busiest stations in Mumbai – the Elphinstone Road and Parel stations. Twenty-three people died in the stampede, many more were injured.

It turned out that Railways Minister Piyush Goyal’s predecessor, Suresh Prabhu, had cleared plans for a new overbridge at the Elphinstone Road station in 2015 but the railways had taken 18 months to call for the bids. This too was done only after the massive tragedy.

Railways Minister Goyal called the delay “a wake-up call for all my colleagues in the railways”. He ordered a probe as well. Within the next month, the government called in the army.

That meant the Bombay Engineer Group, a regiment of the engineering corps of the army.

The officer leading this effort, Brigadier Dheeraj Mohan, told reporters that the bridges being built at Mumbai were actually “part of the war store” brought in because they had an early target to meet.

“We got it (material) from the war store because when this tragedy happened… innocent lives were lost…. And the army got the responsibility to fast track it,” Brigadier Mohan, who is Commandant of the Bombay Engineer Group, said.

“This bridge was moved from (near) the China Doklam border,” he said, a reference to the army’s “war store” on the Indian side of the Doklam Plateau.

The plateau is claimed by both Beijing and Bhutan as their territory. India backs Bhutan’s claim to Doklam that became well-known because it was the site of an aggressive stand-off with China that lasted 73 days.

The over-bridge, mostly made of high carbon steel, is as good as a permanent bridge, he told NDTV.

Similar bridges built 40-50 years back are still functional in harsh climates, he said.

Brigadier Mohan told NDTV that the overbridge – called Bailey bridges after the British civil servant who had designed them during the Second World War – had been built to higher specifications than sought by the railways.

“I think fair to say that 90 per cent of the work is complete,” he said.