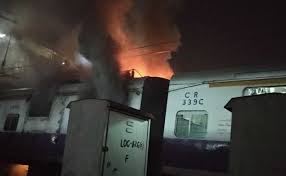 A major mishap was averted when the driver of Toofan Express detected a fire in the parcel coach and immediately detached it from other bogies, an Eastern Railway official said.

There was no injury or casualty to any passenger of the train, and only the parcel coach was affected in the fire that occurred between Mugma and Thaparnagar stations of Asansol division of Eastern Railway, the official said.

The 13007 Udayan Abha Toofan Express was travelling from Howrah to Shri Ganganagar when the blaze was detected at around 4.10 pm.

The driver, Bidyut Mondal, detected the fire and showing exemplary presence of mind, stopped the train and immediately started taking safety measures, he said.
The affected parcel van was separated from the other compartments and the engine.

A separate engine was called in to take back the train to Mugma, from where it will proceed to its destination after lines are cleared, the official added.