FIR against unknown persons in Utkal Express derailment, charges include ‘death due to negligence’

Aug 23, 2017 Posted by Indian Railways Updates Indian Raliways News Comments Off on FIR against unknown persons in Utkal Express derailment, charges include ‘death due to negligence’ 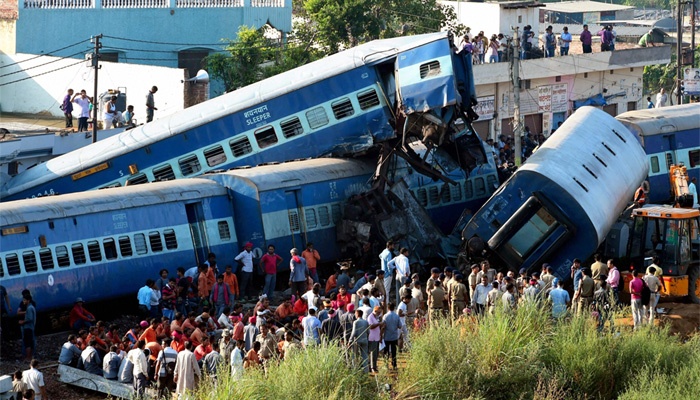 An FIR has been lodged against unknown persons under various sections including 304A of IPC (death due to negligence) in the tragic Utkal Express derailment.

Sections under the Railways Act include 151 – damage to or destruction of certain railway properties and 154 – endangering safety of persons travelling by railway by rash or negligent act or omission, as per ANI.

Thirteen coaches of the high-speed Utkal Express yesterday jumped the rails, with one of them crashing into a house adjacent to the track near Khatauli in UP, leaving 23 dead and over 100 passengers injured.

Meanwhile, building on overnight search and rescue operation, the railways today deployed high-tech cranes and scores of workers to clear the tracks even as the sleepy town of Khatauli tried to come to terms with the train tragedy.

Two heavy duty 140-tonne cranes were pressed into service at the crack of the dawn to clear derailed coaches, from which the survivors were rescued and bodies pulled out till late last night.

Linesmen and other workers brought from nearby places, shovelled away the unwanted stones as new concrete sleepers were laid to reinforce the ill-fated tracks.

“The train had 23 coaches out of which 13 had derailed. It was running at a speed of about 100 kmph when the accident took place,” said Delhi Division DRM, RN Singh, as per PTI.

Six of the derailed coaches were damaged severely.

A posse of security personnel from the UP Police, the the RPF, the PAC, the RRF, has been deployed at the site of the accident since it occurred last evening.