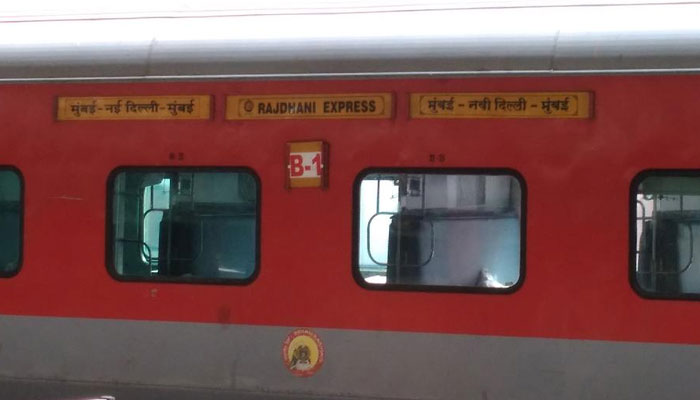 Mumbai: The Delhi-Mumbai Rajdhani Express, which was touted as Indian Railways’ gift to passengers ahead of Diwali, reached its destination nearly 47 minutes late in its maiden trip on Tuesday.

According to reports, the new Rajdhani express, which was projected to be much ‘cheaper’ and ‘faster’ than the other two Radhanis running between the Mumbai-Delhi route, arrived at the Bandra Terminus nearly 47 minutes late, several hours after it was flagged off from the Hazrat Nizamuddin station in Delhi on October 16.

Ahead of its launch, it was said that the new Rajdhani will cut the time taken to complete the journey between Mumbai and Delhi by two hours.

The newly-introduced train was scheduled to take just under 14 hours to run between the two cities and with just three stops – Kota, Vadodara and Surat.

The train reportedly got late by one-and-half hours between Vadodara and Ratlam, according to rail officials. However, the delay was reduced to 70 minutes by the time it reached Surat.

The train will be beneficial for travellers as it will reach the respective destinations at around 6:00 am, giving them more time to spend in the city as well as helping them avoid suburban peak hour traffic.

Flexi fare shall not be levied on bookings on this train. The fare of the train, however, will be 20 percent more than the base fare of the existing Rajdhanis on the route. The concession is between Rs 600-Rs 835.

The catering services will be optional resulting in further reduction in prices if the passenger chooses to opt out.

The special train will comprise one first AC, two 2AC and twelve 3AC coaches besides a pantry car and two power cars.

The train will be hauled by two electric locomotives for better acceleration, deceleration and higher speed. It will run at a maximum speed of 130 kmph.

The Delhi-Mumbai line is important for the railways as the route, once frequented mostly by business travellers, has been losing passengers to airlines.