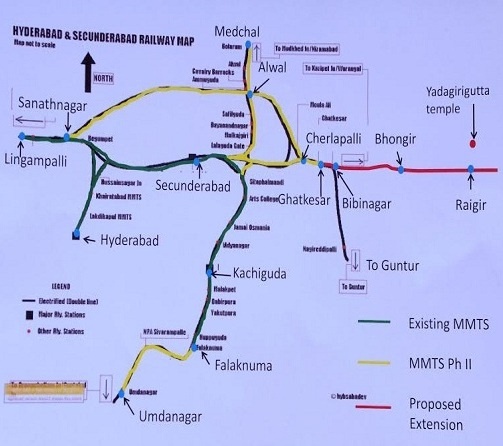 Extension of Multi Model Transport System (MMTS) to temple town Yadadri has been cleared. Sanctioning the extension of MMTS Phase II from Ghatkesar to Raigir, Rail Vikas Nigam limited (RVNL) has sent the detailed estimates for the project. RVNL has estimated the total project cost to be around Rs 412.26 crore.

This cost will be shared between the Telangana government and the Indian Railways at 2:1 ratio.

The state government has to provide around Rs 290 crore as its share and remaining amount will be contributed by the railways.

RVNL has asked the state government to release Rs 75 crore to-wards the first installment to start work on the project.

Once the state government gives its approval and releases the funds, the project will commence.

Telangana Chief Minister K Chandrasekhar Rao who has been vocal about his keenness to provide a railway link to the pilgrim town of Yadadri, had requested the Railway Ministry to grant approval on the extension of MMTS Phase II services from Ghatkesar to Raigir.

Raigir is just three km away from temple town Yadadri.  The distance between Ghatkesar to Raigir is 32 km. After the extension of MMTS Phase II to Raigir station, the state government wants to rename it as Yadadri.  The estimated time it would take to reach Raigir from Secunderabad by MMTS is 45 minutes.

Woes of lakhs of commuters plying between Malkajgiri, Sainikpuri, Neredmet and Hi-Tec City may end soon as Multi-Modal Transport System (MMTS) Phase II work between Sanatnagar and Moula Ali has picked up pace.A survey on acquiring defence land to lay the railway track between Sanatnagar and Moula Ali is underway .A team from Defence Estate Office and local military authority (LMA) has been carrying out the survey for the past two weeks and might complete the task by September-end.

Though the Rail Vikas Nigam Limited (RVNL), which is executing the project, had received a communication from the ministry of defence (MoD) regarding permission given to the LMA to take up a detailed survey on defence land in June, the LMA delayed it stating that they were yet to get any communication from their headquarters. As a result, the survey got delayed by nearly two-and-half months. In fact, the RVNL had been pursuing the issue since 2012, but due to unknown reasons, the survey got stuck in red tape.

To lay the railway track between Sanatnagar and Moula Ali, the RVNL would require 65 acres of defence land, especially near Suchitra (Secunderabad Cantonment periphery). The LMA raised objections over parting land of the firing range. Now, the LMA has asked the RVNL to pay compensation for the defence land. According to the MMTS Phase-II proposal, 35-km track would be laid between Ghatkesar and Sanatnagar via Moula Ali. MMTS phase II works are currently on between Ghatkesar and Sanatnagar via Moula Ali (37 km). Five stations -Ferozguda, Suchitra junction, Bhudevi Nagar, Neredmet and Moula Ali HB Colony -would come up between Moula Ali and Sanatnagar. “Survey on the defence land in at a brisk pace. The team hopes to complete 65-acre land survey by September end. Later, a survey report will be submitted to the MoD for a decision on land transfer,” defence sources told.

Meanwhile, the railway authorities completed marking properties likely to be affected as part of doubling the railway track at Rail Katta Lane at Nandamuri Nagar. This is as part of the new railway track proposed between Moula Ali and Sanatnagar. As per the demarcation, nearly 42 properties might get affected.Locals have appealed to the railways to provide them alternate parcels of land When contacted, Ward NoVI member Pandu Yadav, in whose jurisdiction the area falls, said.” It is true some properties at Rail Katta Lane will be affected as part of MMTS phase-II. I will make efforts to either shift them to another area or construct new houses on abutting defence land.”