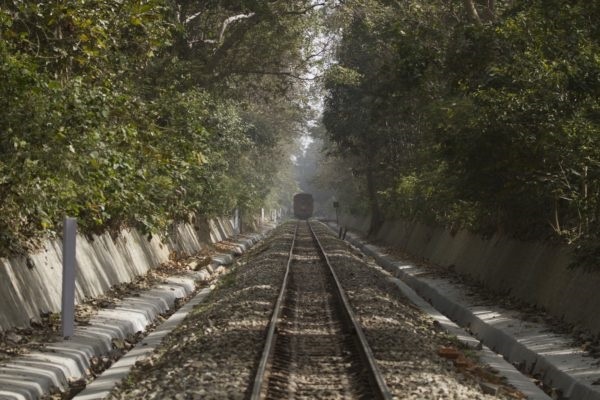 Railway Minister Piyush Goel on Thursday announced several sops for Uttar Pradesh at Investor summit with converting the Dudhwa-Lakhimpur meter gauge rail line as an international heritage destination, setting up a rail refurbishment factory in Jhansi and a rail auxiliary park in Fatehpur.

Lakhimpur, not to be confused with North Lakhimpur on the NFR, is the district headquarters of Lakhimpur Kheri and quite easily the most important town en route. The name `Lakhimpur’ actually derives from `Laxmipur’, historically named for the Sankata Devi Laxmi temple that is located there. Kheri is actually a different town, situated a short distance away and deriving its name from the `Khair’ trees. On the railway front, Lakhimpur boasts 8 tracks, 1 `pucca’ platform, a track level island platform, a signal cabin and the largest crowd we would encounter on that section. The station building. more specifically the GRP outpost. is the most graceful looking one we see on the line, and a little beyond that is, what appears to be an active goods siding.

After Lakhimpur the alignment bears sharply west and the crop pattern changes almost instantly. Paddy fields are few and far between while sugarcane takes over as the dominant crop in these parts. Some of these areas are also low lying as is evident by widespread inundation. At one point, a railway bridge, which has, no doubt been damaged during the recent floods, necessitates a complete stop, and only after the driver signs some paperwork, are we allowed to proceed, albeit at crawl speed. The local boys don’t seem to mind though and continue using the somewhat sunken railway embankment as a perch from which to dive into this gushing rivulet.

The stations on the Sitapur. Mailani section appear to be much larger than the ones south of it and this may well have something to do with the prosperous sugarcane belt that we are now passing through. Gola Gokaranath is no different, having exactly the same number and type of assets as Lakhimpur. While it doesn’t hold district HQ status, it is well known for its Shiv Temple. The Up Ruhelkhand is crossed here and leading it is a freshly turned out YDM4 # 6346, looking dazzling in its bright blue livery.

As we leave the station, a goods siding is spotted, which is almost certainly abandoned but has those tell tale signs of having seen better days. The tracks from the siding continue to run parallel to the main line some more, eventually forming a four track yard, with several leads into what is evidently the largest sugar factory we will cross on our way. As was the case in Balrampur, the previous night, we are confident, that come winter, the yard will be busy again.