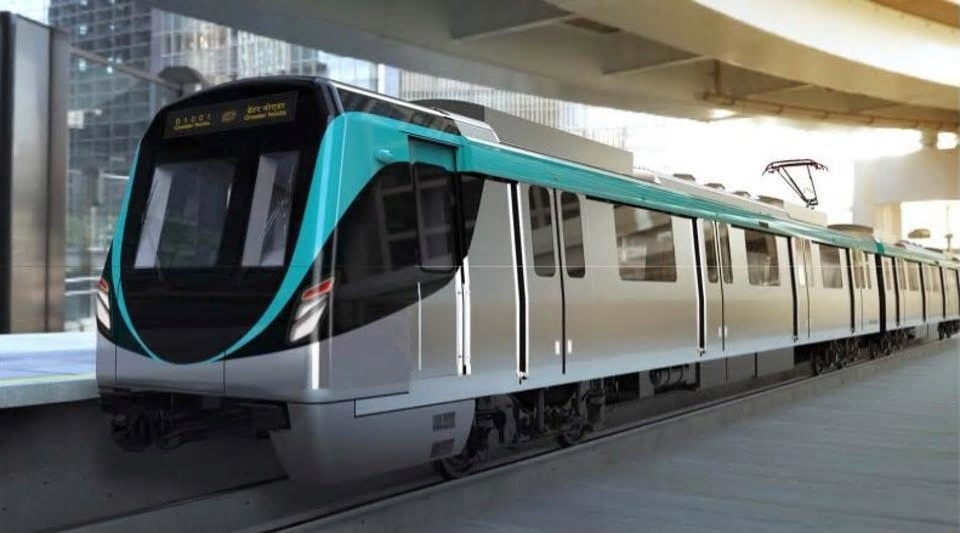 Singh flagged off the trial run after a brief ritual ceremony here which was attended by Chief Executive Officer and Noida Metro Rail Corporation Managing Director Alok Tandon besides other DMRC officials.

Initially the metro will run between Greater Noida Depot to Knowledge Park 2 metro station, a stretch of around 6 km, after tests and clearance, according to an official release.

The total length of this metro link is 29.07 km and is called the Noida-Greater Noida Metro Rail corridor. It has 21 metro stations, with Noida Sector 71 in Noida and Delta Depot Station in Greater Noida being the two terminus stations, the release stated.

The Rolling Stock of this corridor is being procured from CRRC Limited, a state-owned Chinese manufacturer. DMRC had signed the MoU on behalf of Noida Metro Rail Corporation (NMRC) Ltd with CRRC Corporation Limited in March 2016. The Standard Gauge trains are being manufactured in the Nanjing Plant.

The Standard Gauge trains are being manufactured in the Nanjing Plant. The train with 4 coaches had arrived in Greater Noida on 14th December 2017. Basic movement trials and validations were done over the last fortnight.

The train has been designed with ‘Aqua Blue’ as its theme colour. Each train will comprise four coaches with a total seating capacity of 186 passengers. Total passenger capacity of the train (Seating + Standing) is approximately 1,000 passengers under loaded conditions.

The corridor will have a total of 19 train sets (i.e, 76 coaches). The trains are expected to arrive every fortnight, according to the release.

Each train has two driving trailer cars and two motor cars and the total number of seats in both are 43 and 50, respectively. Each coach has ports for mobile and USB charging, 6 backlit LCDs (Liquid Crystal Displays) and 4 Dynamic Route Maps.

Dedicated space has been provided for wheel chair based commuters in Driving Trailer cars at both the ends of the trains, it added.

The Civil Work of this 29.7-km-long standard gauge corridor having 21 stations was completed in November 2017 with the erection of the last girder. Track laying and system works are in progress.

During the test run, the train will undergo rigorous signaling testing. During testing and the trial runs, the interface of the Metro train will be checked to ensure that there is no physical infringement with civil infrastructure during the movement of the train on the track and also testing of various subsystems of coaches shall be done.

Noida and Greater Noida Authorities have decided to have their own Special Purpose Vehicle (SPV), jointly funded by authorities of the two cities, in the name of NMRC.

After the trial run and technical clearance, the Metro service will be inaugurated and opened to public. Uttar Pradesh Chief Minister Yogi Adityanath is expected to inaugurate it, the release said.

The purpose of NMRC is to facilitate mass transit and other urban transport in the twin cities, it said. “NMRC’s vision is to develop a world class metro with sustainable development. Its mission is to provide safe, reliable and eco friendly transportation services for people,” it added.

NMRC said it had started a city bus service last year and its fleet is connecting Metro stations in Noida, and also connecting it with various sectors in Greater Noida.

This metro corridor is constructed by the DMRC on a turnkey consultancy basis. For this a memorandum of understanding (MoU) with the DMRC was signed in October 2014.

It said there is also a plan to implement ‘one city-one card’ as smart card for this metro corridor and feeder buses of NMRC.

This corridor will have green energy intitiative as 10 MW solar power generations is planned from solar panels installed on rooftops of Metro stations.

Rainwater harvesting provision will also be available at all stations and along the viaduct.

Beside this Metro corridor NMRC will develop two other metro corridors. One corridor is 14.95 km corridor between Noida Sector 71-72 to Greater Noida Knowledge Park V having 9 metro station. Other corridor to be developed by NMRC is 10.922 km from Okhla Birds Sanctuary to Sector 142 Noida having eight stations.