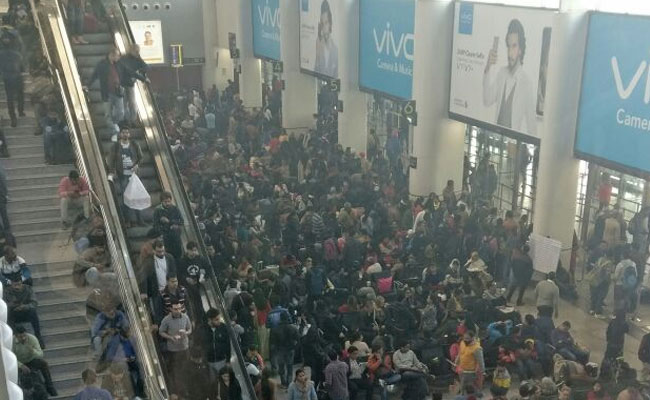 Hundreds of passengers at Delhi’s airport and several railway stations in north India were left stranded on Sunday after multiple flights and trains got delayed due to the thick fog.

As the visibility level at the three runways of the Delhi airport went below 50 metres, all domestic and international flight operations were put on hold between 8am and 10am. Upto 90 flights were affected, while most were delayed or diverted, nearly 20 were cancelled. According to airport officials, flights started landing again after 10 am and take-offs resumed after 11:30 am.

Sima Mukherjee, 50, and her husband Shankar Mukherjee, 54, planned to celebrate the New Year at their home in Kolkata but when they reached the airport from Noida they were told that their flight scheduled to depart at 9:50 am had been cancelled.

“This is so troublesome. Our money also got wasted because we came all the way from Noida till here and tomorrow again we will have to spend so much money to come here and catch a new flight.” Meenakshi Jangra, 31, said, “My friend had a 3:30 pm flight to Ranchi and we just received a message that the flight has been cancelled. We travelled all the way from Hissar (Haryana) for four hours to see her off. The entire new year plan has been spoiled now.”

Train passengers too were hassled as nearly 57 trains were delayed and 15 cancelled. Neelam Sharma, 45, a passenger, said, “I am going from Delhi to Gaya. The train was supposed to depart at 12:10pm but it is late and will arrive at 6:45 pm. It is already a 24 hour journey from Delhi to Gaya…this delay will only worsen things.”

While the weather conditions have already disrupted the new year and travel plans of so many people the weather department has predicted dense fog on Monday morning as well and temperature is expected to fall further.