Demand for 104 km Nuh-Delhi Railway line back on track 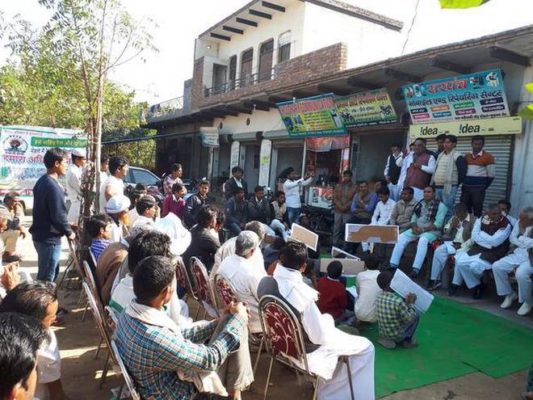 GURUGRAM: Located about 80 km from Delhi, Nuh is mostly inhabited by Meo Muslims (the Muslims considered to be descendants of Arjuna in Mahabharat). Nuh is the most backward region in Haryana marred by poor literacy rate, unemployment and low per capita income. Besides lack of opportunities for higher education in the region, poor connectivity with Delhi is another factor blamed for the present state of affairs of under-development.

Rail connectivity with Delhi has been one of the most long-pending demands of the people of the region. Despite an announcement in the 2013 Railway Budget by then United Progressive Alliance government, the project is yet to see the light of the day.

Former Haryana Transport Minister Aftab Ahmed said an ambitious project to connect Delhi to Alwar via Nuh through a railway line was announced by then Union Railway Minister Pawan Bansal. However, the project was put on the back burner with a change in regime a year later.

“The cost of the project was estimated to be ₹1,000 crore and a letter was given to the Union Ministry on behalf of then Haryana Chief Minister Bhupinder Singh Hooda offering to bear 50% of the total cost,” he said.

Spearheading a campaign on the issue, Hamara Adhikar Morcha (HAM) convener Mohammad Younus Alvi said: “In reply to a RTI application in July 2013, the Department concerned furnished a map of the project and the estimated cost. As per the reply, the 104-km railway line was slated to pass through 38 villages of Nuh with stations at Sohna, Nuh and Ferozepur Jhirka.”

“When farmers in Rewari, Hodal and Palwal growing vegetables can earn huge profits by selling produce in Gurugram and Faridabad due to better connectivity, farmers in Nuh, if connected by rail, will be able to fetch three times the price for their produce in Delhi compared to what they get now. Railway stations will also create job opportunities for the locals,” said Mr. Alvi.

Alleging that there seemed to be a larger political conspiracy to deny better education opportunities and connectivity to Nuh and keep the people of the region illiterate and poor, the former district councillor said the proposed rail connectivity can turn around the fortunes of the region.

Advocate Akhtar Hussain, a local, said a vast majority of the population in Nuh was involved in agriculture and animal rearing, but was exploited by middlemen. “While milk in bigger cities sells for ₹40-₹50 per litre, it is sold for ₹18-₹20 in Nuh. Better connectivity will help the locals break free from the clutches of middlemen and fetch higher prices for milk and milk products,” he said.

Demonstrations are being held at village and block levels to garner support for a bigger demonstration at the district level later this year.

Even the brand of Islam followed by Indian Muslims varies from region to region. Few seem to be aware that there are numerous Muslim communities who profess Islam but remain steeped in the local Hindu ethos. For instance, just outside the city boundaries begins the large pocket where the Meo Muslims live. These Muslims profess Islam but follow a fascinating composite culture that accommodates many Hindu customs. They trace their origins to Hindu figures such as Rama, Krishna and Arjuna and celebrate many Hindu festivals like Diwali, Dussehra and Holi.

And the Meos are no obscure tiny sect; they are a 400,000- strong community found in the region known as Mewat, which is spread across the border areas of the three states of Uttar Pradesh, Haryana and Rajasthan. In Uttar Pradesh, they are found in the Chhata tehsil while in Haryana, the Meos occupy the Nuh and Ferozepur tehsils of Gurgaon district. But the area where the Meos dominate and have been able to preserve their unique culture is the Alwar district of Rajasthan, just a two-hour drive from Delhi.

The Meos are famous across the Mewat belt for their narration of folk epics and ballads. Their oral tradition is a rich source for studying and understanding the community’s history. Among the epics and ballads sung by the Meos, which are derived from Hindu lore, the most popular is the Pandun ka kada, the Mewati version of the Mahabharata.

The Meos have a distinct identity, separating them from both mainstream Hindu and Muslim society. Their marriages combine the Islamic nikaah ceremony with a number of Hindu rituals – like maintaining exhaustive gotras, a distinctly Hindu practice. One fascinating tradition still preserved by Meos is the tracing of their genealogy by Hindu genealogists known as jaggas. The jaggas are an essential part of any lifecycle ceremony in the Meo community.

The Meos are believed to have gradually converted to Islam between the twelfth and the sixteenth centuries. Their Hindu origins are evident from their names, as most Meos still keep the title “Singh”, revealing the syncretic nature of the community. Ram Singh, Til Singh and Fateh Singh are typical Meo names. Fateh Singh, a Meo balladeer in the village on the outskirts. After reciting the Pandun ka kada, he spoke at length on what he believed to be the community’s origins. Fateh Singh and his fellow villagers firmly believe that they are Kshatriyas descending from Arjuna of Mahabharat times, however gradually converted to Islam under the influence of Sufi Pirs during Moghul regime. But they told me that the Meos are gradually giving up the celebration of Hindu festivals. “If you go into villages in the interior, you will see that the Meos are just like Hindus. You will not be able to make out the difference between Meos and Hindu villagers. But near the city, more and more people are giving up Hindu customs and rituals.” Earlier, all Meos traced their origins to Arjuna through the Pandun ka kada since ages unknown. However as a result of this deliberate Islamisation, epics such as the Shamsher Pathan and Behram Badshah – which suggest that the Meos came from Arabia – are also gaining in popularity. But what is remarkable is that they have still retained much of their old ways of life. One does not have to search too hard to find a Meo singing the Pandun ka kada or celebrating Dussehra. They still remain a fascinating testament to a shared history, a shared culture in the subcontinent.