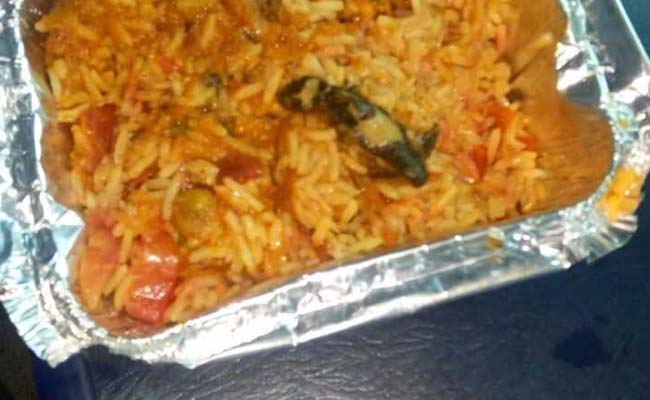 Just days after an auditor’s report submitted in parliament said food on trains in India is unfit for human consumption, passengers on a train in Uttar Pradesh have been served proof. A dead lizard was found in a meal on the Poorva Express on Tuesday.

A group of pilgrims travelling from Jharkhand to Uttar Pradesh spotted the disgusting “garnish” in veg biryani when the train was near Patna. One person fell ill. Alerted to the fact, a staffer simply threw the meal out of the train. When a complaint to the ticket examiner and the pantry car attendant drew no apparent response, the passengers tweeted to Railway Minister Suresh Prabhu.

The impact of the tweet was that when the train rolled into the Mughalsarai station in UP, several senior officers came and medicines were given to passengers taken ill.

Kishore Kumar, a senior railway officer at Mughalsarai, said the biggest concern was passengers’ health. “Before the train arrived here, doctors inquired about their health and also prescribed medicine. We will investigate and take strong action,” said Mr Kumar.

He said a report would be given to the ministry.
Last week, a report of the Comptroller and Auditor General (CAG) flagged that the food served on trains is unfit for human consumption at some places, cooked in polluted water and in most unhygienic conditions.

After an assessment of 74 railway stations and 80 trains across the country, the auditor said the food was stale at many places; dirty tap water was used to cook food; food wasn’t covered to protect it from dust and flies, and cockroaches and mice were found on trains.

Mr Kumar said: “We took the CAG report as feedback and we are taking strict measures to enhance our service.”