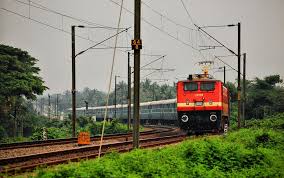 With electrification works in the Tiruchi-Karur-Erode broad gauge section over, the Central Organisation for Railway Electrification (CORE), which executed the project, has invited the Commissioner of Railway Safety (CRS) to carry out mandatory inspection of the electrified stretch prior to operation of passenger and freight trains.

Ahead of the CRS statutory inspection, CORE officials have decided to carry out a trial run in the nearly 140 km electrified section using an electric locomotive. The trial run is expected to be conducted next week from Erode to Tiruchi by attaching a tower wagon and service vehicles to the electric loco.

A senior CORE official said the trial run would be carried out at a speed ranging from 60-90 km/hour. Following completion of the electrification works, the CRS had been invited to conduct statutory inspection of the electrified stretch. Only after obtaining sanction from the CRS would the stretch be formally commissioned for operation of passenger and freight trains hauled by electric locomotives.

CORE authorities expect the visit to take place by this month-end. If everything goes on as per plan, the electrified stretch is most likely to become ready for operation of trains from next month, the official added.

The electrification project wascompleted at a cost of Rs. 140 crore.

Initially, power will be drawn from sub stations at Tiruchi and Erode for operation of the trains. The ongoing works of establishing electric sub stations as part of the project at Velliyanai, Pettavaithalai and Pugalur are all expected to be completed in the coming months.

The official said electrification works in the 71-km Karur-Dindigul broad section, which are also being carried out by CORE, was expected to be completed between March and April.