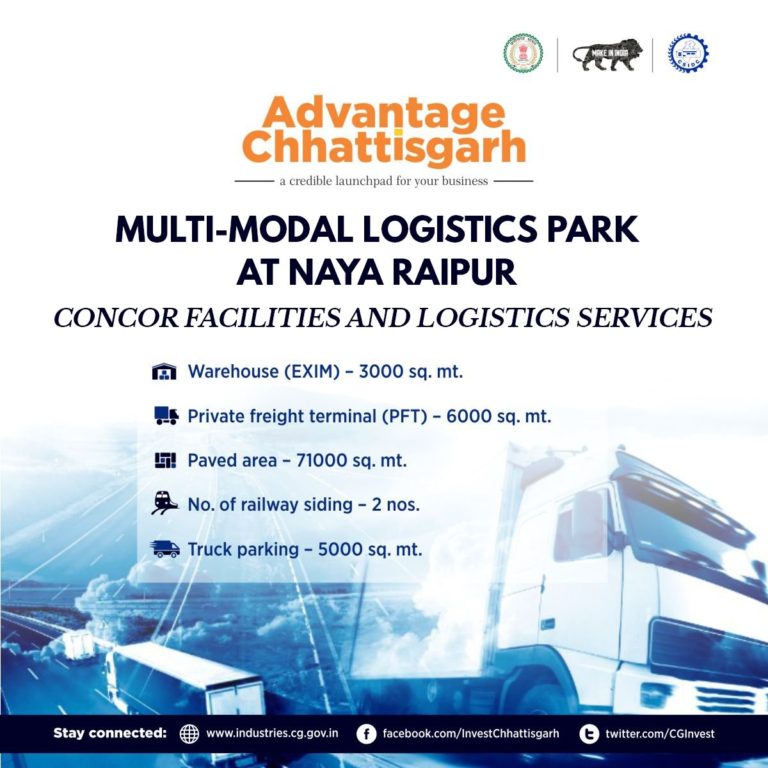 In a major boost to infrastructure development, Container Corporation of India (CONCOR) is ready to commission two multimodal logistics parks in Central India, one at MIHAN in Nagpur city and other at Naya Raipur. Member Traffic/Railway Board, Mohd. Jamshed, is to inaugurate the two logistics parks, part of ambitious drive of Central Government to put in place facilities so that when economy makes a turn around they can be put to major use. MIHAN’s multimodal logistic park (MMLP) would be biggest over Central Railway.

While the MMLP at Naya Raipur is complete and custom notification too is going to be out in next fortnight, the one at MIHAN is a soft launch as the cross overs from Khapri stations are not in place as yet, informed A K Satpathy, Chief General Manager, CONCOR, Nagpur Region. He confirmed that MT Jamshed will first inaugurate the MIHAN facility on morning of January 17 and later in Raipur the same evening. The MIHAN and Naya Raipur MMLP are both having identical area, about 120 acres that is quite huge and would tend to both internal as well external bound cargo.

Talking about MIHAN Depot, Satpathy said the cross overs to enable entry and exit of train rakes has to be done by Railways and for it CONCOR has deposited Rs. 55 crore with them. The tender has been awarded and the work is expected to take about eight to nine months after which CONCOR’s MMLP at MIHAN will be commissioned fully. Also the custom certification will take some time till all the facilities like warehousing and storing of inbound materials are in place and till then we will cater to domestic traffic. Till that time a rake or two of open wagons would be able to ply from the MIHAN MMLP, he disclosed.

Nagpur is the logistics hub of central India and a major commercial center. The city is strategically positioned in the middle of the country with all the characteristics that are required to cater to logistics needs of central India and beyond. But what is interesting about Nagpur is that this tier-2 city has three inland container depots (ICDs) – two privately owned and one managed by Container Corporation of India Ltd. (CONCOR). This speaks volumes about the city’s logistical and infrastructural strength. The huge projects undertaken by Maharashtra Industrial Development Corporation (MIDC) around Nagpur and the region’s capacity to produce coal, cotton and rice inspired the setting up of three ICDs.

Post laying of loop lines that would enable cross over from depot to mainline and vice-versa, the MMLP here would get fully going then CONCOR would be in position to ship eight to ten rakes as and when there is demand. Here there is also facility of private freight terminal (PFT) through which local business houses can ship small cargo and need not have to book entire rake. The advantage with this depot is that it location outside the city periphery means there would be no restriction on movement of cargo trucks. As to Ajni facility, Satpathy said that thing is exclusively meant for container traffic only whereas one at MIHAN can also have loading of open wagons which are mostly in use over Railways. At Ajni, the restrictions on movement of heavy trucks creates major problem for loaders.

Member Traffic, Railway Board, Mohd. Jamshed is going to review the freight and train operations of Central Railway and especially Nagpur Division during his visit to city on January 16. The visit of MT is quite significant as division now occupies second spot in terms of tonnage transported over Railways during this financial year, which is 55 per cent jump over preceding year. Thus Nagpur Division and Bilaspur Division of South East Central Railway (SECR) now contribute about three-fourth of revenue to Railways through loading. This is the maiden visit of MT to Nagpur Division.

Jamshed is going to be on two day tour of Central India with first stop over at Nagpur and thereafter visit to Raipur. He is being accompanied by a high level team of Board officials including Principal Executive Director, TT (M), ED (Rates), ED (Cord), Director (F&F). The same day during evening, Member Traffic has scheduled a meeting with top officials of Central Railway where he would review the operating performance and also meet with CMD, Western Coalfields Limited (WCL) and discuss the coal loading. Chief Operations Manager (CoM), Chief Commercial Manager (CCM) and Chief Freight and Transport Manager (CFTM) would be coming from CR’s Headquarters to brief MT.

Chairman & Managing Director, CONCOR, V Kalyana Rama, too is arriving from New Delhi for the inauguration of the two MMLP. The inauguration of MIHAN MMLP is at 9 am on January 16 while that of Naya Raipur MMLP at 4 pm the same day.

After wrapping up Nagpur programme, MT is going to proceed to Raipur and on the route he will do window trailing inspection of the section, which is very crucial in terms of loading. Jamshed will fly back to New Delhi from Raipur on evening of January 17, it is learnt. He will be accompanied by top officials of SECR including, CoM, CCM, MD, CONCOR, Sr. Divisional Operations Manager (Sr. DoM) of respective divisions.