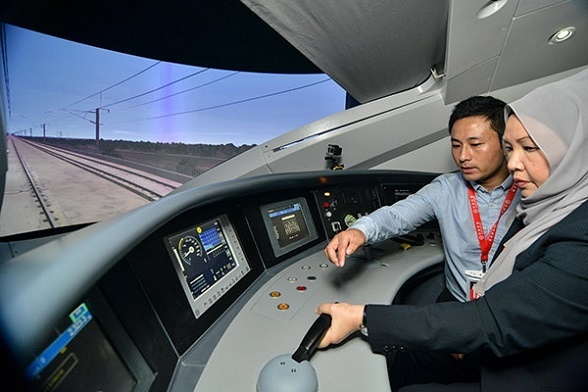 A Chinese consortium led by China Railway Corp will participate in bidding for a high-speed railroad linking Singapore and Malaysia in 2018, marking another step in China’s ambitious strategy to export its high-speed railway technologies to Southeast Asia.

The media office of the Beijing-headquartered China Railway Rolling Stock Co confirmed this move but declined to give any specific details as the matter is still in progress.

A joint tender for the Kuala Lumpur-Singapore high-speed rail project was issued by the Malaysian and Singaporean government-owned utilities－MyHSR Corp and SG HSR, on Dec 20.

According to a joint statement released by the two companies, the potential bidder would be responsible for the design, construction, financing, operating and maintenance of rolling stock and railway systems for the double-track line with a designed speed of 350 kilometers per hour.

“Judging these companies’ size and resources, they will form the largest group to build a high-speed rail network outside China if they win the bid next year,” said Feng Hao, a researcher at the Institute of Comprehensive Transportation at the National Development and Reform Commission.

The tender is open to all companies, regardless of their location. A tender briefing will be held in Kuala Lumpur on Jan 23, and proposals need to be submitted by June 29.

Submissions will be evaluated based on technical merit, commercial robustness, financial sustainability and price. The preferred bidder will be selected by the end of next year.

The governments of both countries signed a bilateral agreement late last year to embark on the project.

According to the agreement, the high-speed rail link is expected to become operational by Dec 31, 2026, and will cut travel time between Kuala Lumpur and Singapore to just 90 minutes.

“The move indicates that China’s State-owned enterprises have stopped cutthroat competition to hurt each other,” said Du Chunbu, a professor of rail transportation at Beijing Jiaotong University.

“Instead, they have started to form a consortium to better compete with rivals from Japan, South Korea, Germany and Canada by bringing their specialties into play.”

The construction of the first section of the China-Thailand high-speed railway started last week in the northeastern Thai province of Nakhon Ratchasima.

The 253-kilometer first phase of the railway links Bangkok with Nakhon Ratchasima province. China is responsible for designing the railway, supervision of construction and manufacturing of trains and signal systems, among others.

Once completed, the railway with a maximum speed of 250 km per hour will be the first high-speed railway of Thailand.