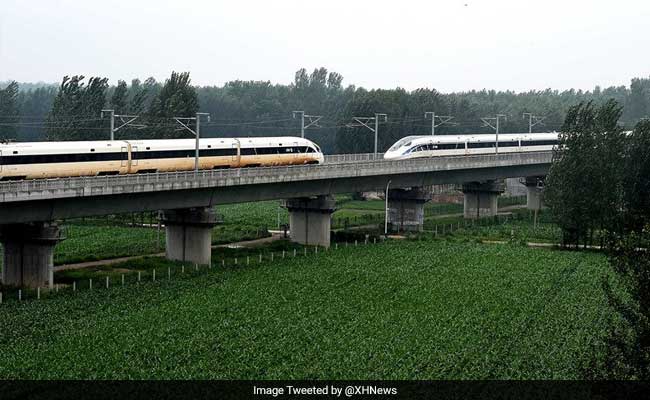 China on Wednesday showed interest in reviving its proposal to build high speed railway projects in India which has chosen Japan as a partner for the country’s first such venture.

China has been aggressively marketing its high-speed rail technology abroad and in the past lobbied hard to get the first contract in India. It had taken up a feasibility study for the New Delhi-Chennai corridor but no headway has been made in this regard so far.

The Chinese side showed interest in the projects in India as Prime Minister Narendra Modi and his Japanese counterpart Shinzo Abe prepared to lay the foundation for India’s first bullet train project.

“China is pleased to see the infrastructure among the regional countries including the high-speed railway,” Chinese Foreign Ministry spokesman Geng Shuang told a media briefing in Beijing when asked about the Mumbai-Ahmedabad bullet train project using Japanese technology.

“We stand ready to promote cooperation with India and other regional countries for regional development,” Mr Geng said expressing interest in reviving the project.

As to the railway cooperation, it is part of the practical cooperation between India and China. We have reached important consensus in this regard. Relevant competent authorities between the two countries maintained communication and increasing speed of railway in the current projects,” he said.

India and China have worked out a number of cooperative agreements for the development of railways under which the Indian Railways engineers are getting trained in China in heavy hauling.

China is also cooperating with India to set up a rail university. It has also undertaken work to renovate some of the railway stations in India.

China currently has the world’s longest high-speed rail network. It has connected most of its cities with high speed trains reducing the travel time drastically.