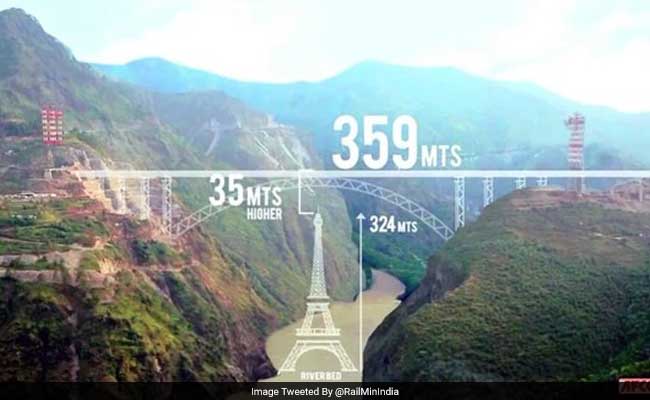 The world’s tallest bridge over the Chenab River in Jammu and Kashmir’s Reasi district, currently under-construction, will be able to withstand up to 8 magnitude earthquakes and high-intensity blasts, according to railway officials.

The arch bridge, a part of an ambitious railway project connecting Kashmir to the rest of the country, will have a “security setup” against possible terror threats and quakes, the officials said.

The work on the Rs. 1,250-crore bridge, which will be 359 metres above the Chenab river bed and stand 35 metres taller than the iconic Eiffel Tower in Paris, will be completed by May 2019.

As Jammu and Kashmir is faced with terror activities and prone to earthquakes, MK Gupta, Member (Engineering) of the Railway Board, said that the railways “will put in place a security setup against any such threat in consultation with defence forces”.

“The bridge has been designed in such a way that it will withstand an earthquake measuring eight on the Richter scale. There will be no damage to the bridge,” Mr Gupta said, who began the work on putting the main arch on November 5.

“The bridge has also been designed with anti-terror features in consultation with the Defence Research and Development Organization (DRDO),” a senior engineer working on the project said, without explaining further.

The bridge, a part of the Udhampur-Reasi-AnantnagSrinagar-Baramulla railway project, can withstand a blast of 30 kg of explosives, the engineer said.

The overall length of the bridge is 1,315 metres, having 17 spans, of which the main steel arch portion across the Chenab river is of 476 metres in length and its height is 359 metres above the river bed.

“There are certain unique and unparallelled features in the under-construction bridge. It is for the first time in India that a concrete-filled steel arch is being used as the main arch,” he said.

He said that the work on viaduct portion of the bridge at Srinagar end was nearing completion.

The project work is being carried out by AFCONS Construction Company through Konkan Railway.

The Udhampur-Srinagar-Baramulla Rail Link (USBRL) Project will be completed by March 2021, he said.

Officials overseeing the project on the ground said that more than 1,300 workers and 300 engineers have been working round-the-clock to complete the bridge in time. Over 70 per cent of the work has been completed, they added.

The construction work started in 2004, but the work was briefly stopped in 2008-09 in view of the safety of rail passengers due to frequent high-velocity winds in the area.