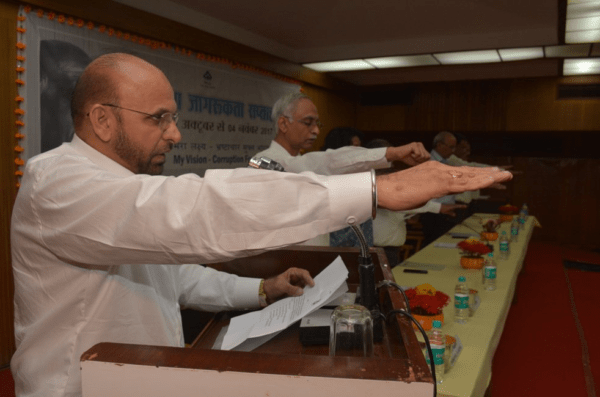 In order to bolster the spirit of Team Bhilai and personally convey the challenge of supplying enhanced quantity of world class rails to Indian Railways, CEO Bhilai Steel Plant (BSP), the flagship unit of the public sector SAIL, M Ravi took the initiative of interacting with cross section of executives of RSM, URM, RTS and RCL departments at BTI Assembly Hall, where inspection officials of RITES were also present.

The interactions were organised on Friday and Saturday and at the end of each of the three shift, thus CEO met the officers and executives.

During these synergy sessions, Ravi informed the participants that the Railways have forecast a huge requirement of rails, for further developing the infrastructure of rail transport in India as well as for increasing passenger safety and comfort.

As such, in order to keep any competition at bay, the plant needs to immediately augment the quantity of rails being supplied to the Indian Railways at least to the extent of 90,000T per month, in order to meet the Railways enhanced requirement.

CEO further stated that although Bhilai Steel Plant is committed to meet the complete requirement of rails of Indian Railways, during financial year 2017-18, the plant has been lagging behind in fulfilling commitment of rail supplies, mainly because of low productivity at the newly commissioned URM.

Ravi, however, appreciated that stabilization of new mill takes some time, meanwhile the performance at URM has gradually improved enabling enhancement of supply level from 4,000 tonnes in April 2017 to 20,000 tonnes in October 2017.

The mill has also overcome all the problems which have come in the way, be it the problem of stamping machine or collaring in BD-2 stand. CEO desired that the new technology at URM should be quickly grasped by the mill personnel so that the mill can steadily achieve higher goals.

CEO also noted that RSM has been producing consistently at a level of around 60000 tonnes per month and needs to further enhance performance both in terms of quality and tonnage. Performance of RSM did suffer during October 2017 due to short supply of blooms, it will be however ensured that availability of blooms doesn’t become a constraint for production of higher quantum of rails from RSM.

Ravi took the opportunity to praise the efforts put by the entire team involved in production of rails including the RITES inspectors who ensure the quality of each and every rail so that it does not fail in its entire service life.

He further emphasised that each and every individual concerned needs to give his 100 percent in maximizing production both from RSM & URM immediately, as the present  situation demands a “now or never” approach from Team Bhilai.