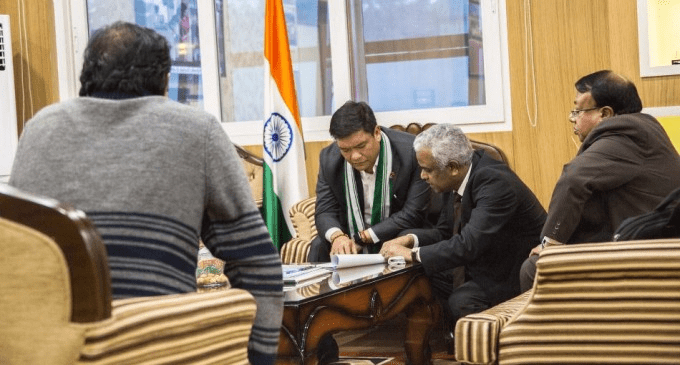 Visiting General Manager of the Northeast Railways (Construction), NK Prasad, met Chief Minister Pema Khandu here on Thursday evening and informed that the Centre has given the go-ahead for a new railway line from Silapathar (falling in the Rangiya Division of N.F.Railway in Assam) to Aalo, via Bame (West Siang district).

Holding a detailed discussion on railway connectivity with the GM and his team of officials, Pema impressed upon the officials that a railway line to Aalo should be made a priority.

Prasad assured that survey work for the railway line will begin soon, and also informed that another new railway line, from North Lakhimpur to Ziro (Lower Subansiri), has been approved.

The Chief Minister requested the officials to immediately start the survey and investigation works, and assured support and cooperation from the state government.

He further sought the status of other railway lines being proposed in the state.

The officers informed him that survey for three railway lines – Margherita to Deomali (31 km), Lekhapani to Kharsang (25 km), and Itakhola to Seijosa (18 km) has been completed.

The chief minister also discussed the progress of the railway line from Murkongselek to Pasighat (26 km) and Pasighat-Tezu-Parashuram Kund-Rupai.

The officials informed that land acquisition process for Murkongselek-Pasighat has been completed and survey work is in full progress. They also informed that survey work for Pasighat to Rupai via Tezu and Parashuram Kund is also in progress.

The meeting also discussed the Bhalukpong to Tawang railway line that will cut down the existing road distance from 385 km to 165 km when completed.

The chief minister said that once these railway lines become fully functional they will benefit the farmers the most as due to lack of connectivity they are unable to find viable markets.