Central Railway to raze illegal structures near stations in Mumbai 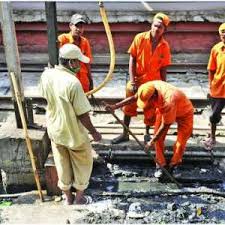 To facilitate passengers, the Central Railway (CR) has decided to demolish over 3,000 unauthorised structures located on railway’s land, including 63 religious structures with the help of local authorities.

After the stampede at Elphinstone Road station, in a joint meeting headed by minister of railways Piyush Goyal held at Churchgate, several multi-disciplinary teams were formed, which audited the stations on the city’s suburban network and submitted a report.

“During the audits of the station premises, many unauthorised structures were found which were creating inconvenience for the passengers,” said a railways officer, who was also a part of the disciplinary team.

The railways and BMC have finally decided to make peace with each other over whose responsibility it was to remove the encroachments near the foot overbridge (FOB) of Elphinstone Road and Parel stations. A week after reports in the media highlighted that nothing had changed since the stampede took place, teams of the Central Railway, civic body, Railway Protection Force and Mumbai Police demolished the hutments lining the approach road to the FOB.

Sunil Udasi, CPRO/Central Railway, said, “It was a special drive conducted by the Mumbai division. About 33 hutments were removed from the Parel side. The space will now be protected so that the structures don’t come up again.”

Sources said that though the FOB on the western side of the Elphinstone Road-Parel station, where the stampede had taken place, has been opened up after removing the panels on the side; the authorities concerned are planning to widen the staircase.

The encroachments that had come up in the area had narrowed down the approach road to the station and was also making it difficult for commuters to move about freely. Sources said that once all the encroachments, including an illegal temple, are removed, there would be a lot of space for free movement.

Saint Valmiki in the ancient Indian poem ‘Ramayana’ mentioned the ‘Laxman Rekha’ as an imaginary line that was drawn to ward off evil spirits and keep Sita safe.

As part of their drive to make railway surroundings and premises safer for commuters, India’s richest civic body, the Brihanmumbai Municipal Corporation (BMC) along with the Railways has decided to adopt a similar concept in keeping hawkers stationed outside railway stations from entering the premises or vending in restricted zones.

Demarcation lines marking 150-metre zones to restrict hawkers from vending in the restricted areas were drawn by the civic body on Monday outside Mahim, Matunga, Dadar and Sion railway stations to ward off the ‘nuisance’ of hawkers.

The move comes in the wake of Bombay High Court’s order banning hawkers from vending on foot overbridges and near railway stations.

We have drawn lines indicating a 150-metre perimeter around railway stations. We have deployed a special team comprising senior inspectors and four workers with a van to monitor hawker encroachment. Currently, they work two shifts. But these nuisance detectors will work for 24 hours. We will also demarcate zones outside schools and religious places, assistant commissioner G (north) ward Ramakant Biradar told.

This move by the civic body has affected the daily livelihoods of hawkers pushing their trades near local railway stations. The BMC has become strict but we want to see how long this lasts, said one of the affected hawkers.

A major stampede at the Elphinstone Road station that claimed 23 lives on September 29 can clearly be noted as the reason behind the crackdown on hawkers vending outside and around local railway stations in Mumbai.

A list of habitual offenders who move around from one spot to the other near various stations is also being prepared and additional security personnel have been deployed to monitor the situation, said a spokesperson with the Railways.