Can Railways Be Held Responsible for Criminal Negligence in Mumbai Elphinstone Bridge Stampede? 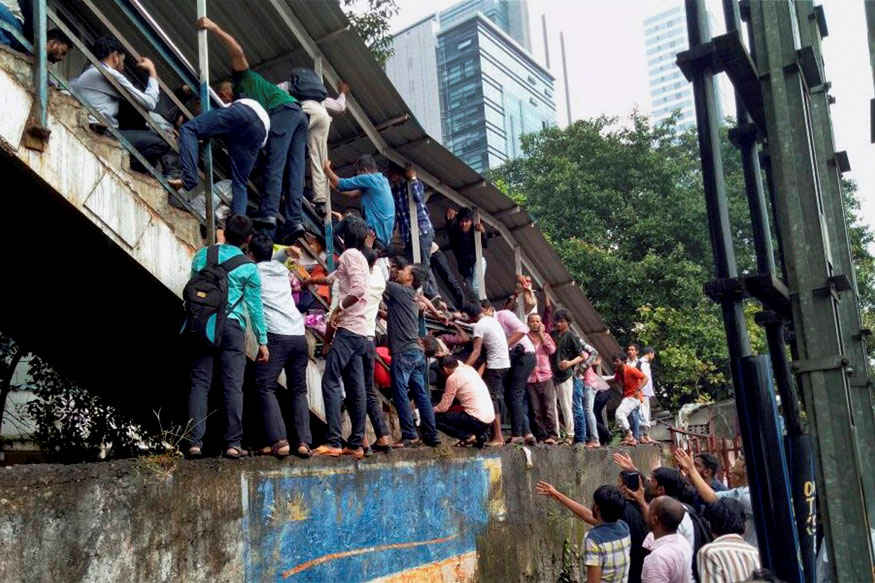 The stampede at Mumbai’s Elphinstone Road railway station foot overbridge, which killed 23 and injured many more, appears to be a case of criminal negligence by authorities as repeated petitions by over a hundred commuters in the past two years were ignored.

But can those who have lost their loved ones in a man-made disaster ever hope for justice beyond the customary ‘compensation’ amount, announced by politicians to placate an angry city? What if Mumbaikars, a collective spirit often invoked by powers that be to escape accountability, were to press charges of criminal negligence against the railway authorities?

“Proving criminal negligence in a case like this is a million dollar question,” said Justice Bellur Narayanaswamy Srikrishna, a retired judge of the Supreme Court of India who headed the Srikrishna Commission which investigated causes and apportioned blame for the Bombay Riots of 1992–93.

“Criminal trial is complicated. It can be an offence under the Indian Penal Code only if it is a case of criminal negligence. Criminal negligence is something that is much higher than not doing one’s job… It appears there was a sudden shower and people ran helter skelter. It is true that the bridge was narrow and not intended to take so many people at the same time. Now, whether this can amount to criminal negligence is a million dollar question,” Justice Srikrishna explained.

“If the bridge was about to fall and railway officials had neglected it, there would have been a clear case of criminal negligence. But in this case the bridge was not falling. The Uphaar tragedy was a criminal negligence because people were inside the cinema hall and there was no exit. That was a criminal act and hence fire regulations are strict,” the eminent jurist explained.

He further said that officers from railway’s top brass cannot be removed because criminal law lacks the element of ‘vicarious liability’. “In criminal law, there is nothing like vicarious liability. I cannot be held for what somebody ought to have done or has failed to do. The chairman of the railway board is not expected to come and check the strength of every bridge. Morally, may be yes, but legally I doubt,” said Justice Srikrishna.

But has legal position in such cases always remained limited to compensation for the victims?

On November 21, 2016, UP police had lodged a suo motu FIR against railway employees in connection with the Pukhrayan rail accident. At least 145 persons died after 14 coaches of Indore-Patna Rajendra Nagar Express derailed in Kanpur Dehat district. Blaming unknown railway personnel, the police pressed Sections 304 (A), 338 and 337 of the Indian Penal Code besides slapping Sections 154 and 151 under the Railways Act.

IPC Section 304(A) amounts to causing death by negligence while Sections 338 and 337 relate to causing grievous hurt by endangering lives. Section 154 and 151 of the Railways Act relate to endangering the safety of rail passengers and damaging railway property.

These sections can be invoked in this case too, but proving a case of such nature against authorities is very difficult.

Asim Sarode, a practitioner at the Bombay High Court and a human rights activists said, “Victims often don’t themselves go to the extent of filing a case under the above sections as most of the times police is not cooperative.”

“Basically, it’s a case of culpable homicide not amounting to murder if there is constant neglect. A writ petition under Article 32 can also be filed in the Supreme Court citing violation of fundamental right. But holding certain department or a person responsible is very difficult. It’s very difficult to hold the government responsible for such inaction. Hence, this lacunae is crying for an urgent legal reform,” Sarode said.

A similar case of gross infrastructural negligence had come to light in Mumbai just a month ago when the city was flooded with incessant rains. Dr Deepak Amrapurkar drowned in an open manhole outside his house. A PIL filed by the Retail Traders Welfare Association sought criminal prosecution against municipal corporation officials for death of the doctor due to their alleged negligence.

The petition sought directions to the police commissioner, who is one of the respondents, to register an FIR for criminal negligence under Section 304 A of the IPC against Municipal Commissioner Ajoy Mehta and other municipal officers.

Can such an action be taken against the authorities responsible for the expansion of Elphinstone footover bridge?

According to Justice Srikrishna, it’s very difficult to prove in a court of law.

Even Justice Mukul Mudgal, former judge of the Delhi High Court and former Chief Justice of Punjab and Haryana High Court said that “following the Uphaar verdict, compensation has become a must but whether at all to rake up charges of criminal negligence depends upon the detailed facts of the case. It is difficult to prove.”

“Negligence will not disentitle grant of compensation under the Railways Act. However, once the negligence becomes a criminal negligence and self-inflicted injury, compensation cannot be granted,” Justice Valmiki Mehta observed.