Bridge to a safer commute 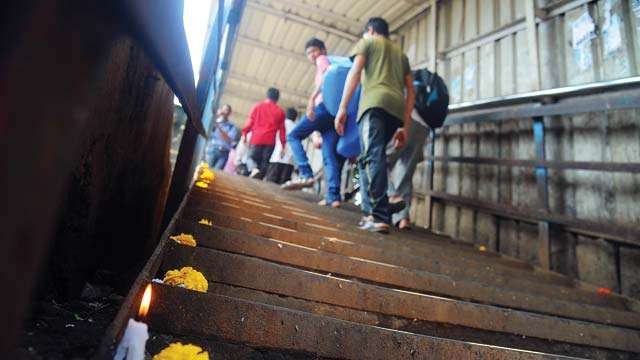 Now that the dust over the Elphinstone Road stampede has settled, it’s life as usual. But it’s important to revisit the story every now and then to ensure it does not end up as just another calendar date for mourning. Much has been said about rail infrastructure, but it may be worthwhile to review the way Railways work. It may also be relevant to ensure practical arrangements for passenger safety till infrastructure outlays fructify into completed projects.

Each day, Mumbai ferries 75 lakh people in rakes programmed to handle half the load. Over the years, the typical solution to the ever-swelling commuter traffic has been to stretch the trains. From nine to 12 to 15-coach rakes this year, Mumbai’s trains are perpetually lengthened to accommodate greater inflow.

A 12-coach rake, which is a standard on Mumbai metropolitan tracks, is designed to carry 3,500 passengers, but ends up taking in 5,000. What has been missed or largely ignored in devising quick commuting solutions are two aspects of crowd management. One is the holding and discharge capacity of local stations. Designed in British times, many stations have narrow exit and entry points. More worryingly, the passage from the disembarkation platform to the exit is through antiquated and claustrophobic staircases and slim foot-overbridges (FOBs), Elphinstone Road station being a case in point.

While the primary response to handling increased loads is stretching the rake, creating commensurate facilities for absorption and discharge of the additional load is done haphazardly or not at all. Thus, expanding an FOB staircase/landing or building a new one is quite often an expendable priority. This is nothing if not a ham-handed approach to growth.

However, intelligent planning alone will not save the day. Railways work under constraints. More often than not, there is no room to widen a platform or install an additional FOB without redoing the tracks in a big way. Expanding an FOB is not possible often for the same reason and when it is, it is a task that gets quite protracted as it has to be achieved without sealing the station. Modifications on the rail network have to be achieved under normal traffic conditions amid a few thousand people bustling about.

The second preventive aspect that has curiously escaped experts and authorities is traffic control. Surely, the answer to ensuring passenger safety cannot lie in the continued expansion of bridges alone. Moreover, how does one prevent a repeat of the tragedy while the new bridge is in the making? The answer to averting such crises lies in crowd management.

Typically, Government Railway Police and Railway Protection Force personnel are posted on Mumbai railway stations according to the perceived need for order and protection of railway property. However, the onus of crowd control does not rest on either force while the station master has little authority.

Crowd control responsibilities need to be divided rationally among these three agencies. Depending on traffic requirements, a few stations can be classified as sensitive and more force stationed at such stations during peak hours. An exceptionally high commuter traffic can be managed by a staggered police presence at these stations. More forces can be requisitioned by the station master on the basis of dynamic need assessment.

The stampede occurred on the day the tender for a new bridge — 12 metres wide as against the existing seven metre one on Elphinstone Road — was floated. Former Railways Minister Suresh Prabhu approved the proposal in April 2015 but it was pending with the railway officials for this long. In reality, it’s a wonder that the tender was floated within five years.

Each zonal railway has a Pink book that is flooded with all major and minor works/projects. Every year, a token amount is invested in works that the Railways wish to see continued. Given the imperative nature of certain projects, safety areas are not really a priority. Technically, new lines, gauge conversion, track renewals, signalling etc. rank above safety. And of course, those pushed by politicians or those concerning freight — the golden goose — get top bidding. The Pink book of the Central and Western Railways has incomplete projects dating to 2004-05 at least.

To be sure, the Railways are larger and more unwieldy than most other ministries. Each file moves from clerks to secretaries to ministers to committees and back a few hundred times in different departments for the tiniest of queries or changes — the process effectively scuttles work. No one including IMF-returned secretaries and economist Prime Ministers has attempted to streamline the process.

The perennial shortfall of money throws a spanner into the works. The Railways need an infusion of Rs 5 lakh crore. Where can it source this kind of money? Budgetary allocations cannot aspire so high and the public-private partnership model works only if there are revenues. Passenger fares, which are so low that even a first-class rail ticket does not cover its cost, can be raised only so much. And even if they are, the incremental addition will be rather modest. There is no way passenger fares can match the realistic requirements of the city’s gigantic rail network.

Till the time someone sits up and plunges into the marathon job of pruning the size of paperwork and thinking ahead as well as out-of-the-box, every day is a stampede waiting to happen