Bogibeel, India’s longest road-rail bridge, to be inaugurated by PM Modi this year

May 16, 2018 Posted by Indian Railways Updates Indian Raliways News Comments Off on Bogibeel, India’s longest road-rail bridge, to be inaugurated by PM Modi this year 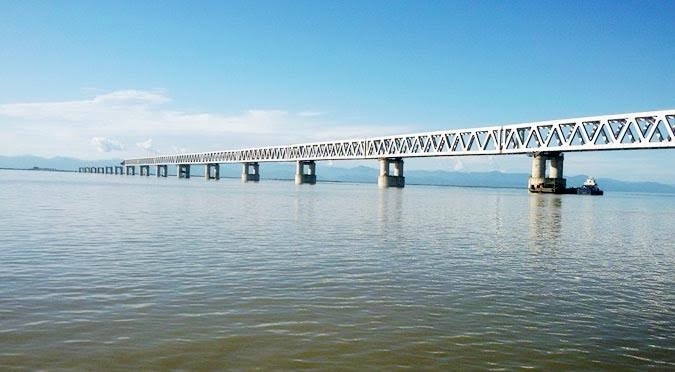 In a major boost to defence logistics along the border with China, India’s longest road and railway bridge connecting Dibrugarh in Assam to Pasighat in Arunachal Pradesh is likely to be inaugurated later this year by Prime Minister Narendra Modi.

While all the civil work would be completed by July this year, two more months would be needed to finish the electrical and signalling work on the 4.94 km bridge, said Mahender Singh, Chief Engineer, construction, Bogibeel project.

The Bogibeel bridge is likely to be inaugurated by Prime Minister Narendra Modi by the end of this year, officials said.

The bridge, which is the second longest in Asia, has three lane roads on top and double line rail below.

The bridge is 32 metres above the water level of the Brahamaputra and is fashioned on a bridge that links Sweden and Denmark.

For the government, the bridge, officials said is both a symbol of development in the northeast as well as part of a strategic move solving logistical issues for the armed forces stationed at the China border to get supplies from Tezpur.

Bogibeel is part of infrastructure projects planned by India to improve logistics along the border in Arunachal Pradesh. This includes the construction of a trans-Arunachal highway on the north bank of the Brahmaputra, and new road and rail links over the mighty river and its major tributaries such as the Dibang, Lohit, Subansiri and Kameng.

India and China share a nearly 4,000 km border, with almost 75 per cent in Arunachal Pradesh.

As of now, the rail and road link to Arunachal is through three Assam bridges – Jogighopa in Bongaigaon district, Saraighat near Guwahati, and Kolia-Bhomora between Sonitpur and Nagaon.

This means that a cargo from Dibrugarh in the north-eastern corner of Assam takes over a 600 km detour merely to cross the Brahmaputra.

The other alternative is crossing by ferry, but it is not suitable for heavy cargo and due to monsoons for six months between May-October, ferry services often remain disrupted.

“Now, to go from Dibrugarh to Arunachal Pradesh by train, one has to go via Guwahati with more than 500 km detour. With this bridge, the journey will be less than 100 km,” said Singh.

Though approved in 1996, construction of the bridge was initiated by the first BJP-led NDA government in 2002.

1. Connectivity: Bogibeel bridge, which has taken several years to build, will connect the North and South banks of river Brahmaputra in the Eastern region of Assam and Arunachal Pradesh.

2. Defence boost: The 4.94 kilometres long Bogibeel bridge will be a big boost for the defence forces as it will provide faster connectivity to areas near the India-China border. This means swifter movement of troops and weapons systems.

3. The journey: Bogibeel bridge is located around 17-kilometres away (downstream) of Assam’s Dibrugarh area. As stated above, the foundation stone for the Bogibeel bridge was laid on 2022 and in 2007, the UPA government had accorded it the status of a National Project. The Modi government had asked for expediting work on the bridge which had already missed several deadlines.

4. Challenges: Bogibeel bridge is also unique for the challenges that were faced in constructing it. Speaking to Financial Express Online, North-East Frontier Railway CPRO Pranav Jyoti Sharma has earlier said that crucial the work for the bridge could only happen between November and March. That’s because early flooding the river Brahmaputra makes it unsafe to continue work. The bridge required huge amounts of construction material to be mobilised in those few months. According to Sharma, the transportation of concrete across the river channels of 600 metres to 900 metres width from the banks was the biggest challenge. This was overcome by adopting pumping of concrete through pipe line laid over buoys.

5. Rail links: As mentioned above, Bogibeel is a rail-cum road bridge and will connect two existing railway networks that run at the North and South banks of river Brahmaputra. At the South bank of the river, the railway link starts from Chalkhowa and Moranhat stations and joins in between the Sisibargaon and Siripani stations of Rangiya-Murkongselek section at North Bank through the Bogibeel bridge.

The North bank railway link was converted from metre gauge to broad gauge. According to Indian Railways, the block section between Dhamalgaon and Tangani station will be a double line section under which the Bogibeel Bridge lies.

7. Saving time: Bogibeel bridge’s biggest benefit is the time that it will save. As of now a train journey from Arunachal Pradesh to Assam’s Dibrugarh requires a 500 km detour via Guwahati. Now, the journey will be less than 100 km. Also, the train journey between Delhi and Dibrugarh will also come down from 37 hours at present (via Guwahati) to 34 hours – a reduction of 3 hours.

8. Fully welded structure: According to Pranav Jyoti Sharma, Bogibeel bridge is a 100% welded bridge! Technology from firms of Sweden and Denmark have been used for its construction. One advantage of a 100% welded ridge is that it is light and the fully welded girders mean reduction in the weight when compared to riveted girders.

9. Estimated cost: The Bogibeel bridge project was initially sanctioned at a cost of Rs 3230.02 crore, but the final cost was revised to Rs 4857 crore keeping in mind cost escalation and increase in the length of the bridge to 4.94 km as against 4.31 km proposed earlier.

10. Other facts: Bogibeel bridge is the second longest in Asia and has been built 32 metres above the Brahmaputra river water level. The design of the bridge is similar to that of a bridge that connects Denmark and Sweden.