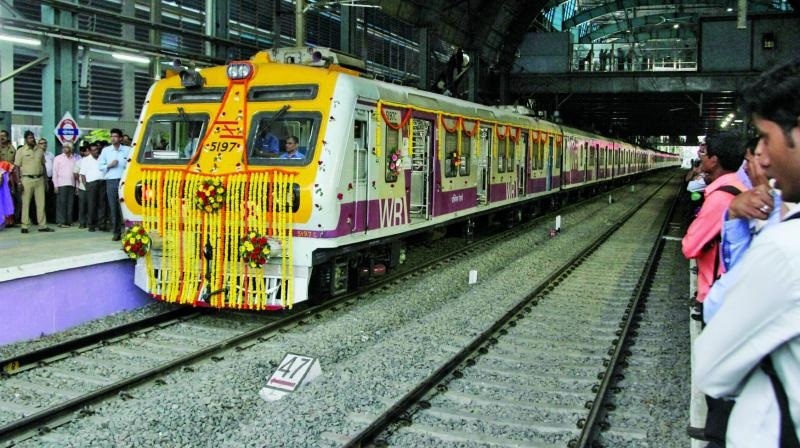 After a few hours of delay, not counting the four years from the initial deadline, Railway Minister Piyush Goyal on Thursday flagged off the inaugural run of the extended Harbour line service from Andheri to Goregaon.

The Minister inaugurated the Andheri-Goregaon service at an event held at the Goregaon station tonight. Prior to this, Harbour line services would terminate at Andheri on Western Railway.

The flag off ceremony, which was scheduled in the evening, finally kicked off around 9 pm as Piyush Goyal arrived at the function in Mumbai a few hours behind schedule. According to sources, his flight from Delhi had got delayed.

Chief Minister Devendra Fadnavis, who was also expected to attend, had to miss the event as he was in the national capital trying to convince activist Anna Hazare to break his fast.

Meanwhile, Shiv Sena leaders boycotted the event as their MLA Sunil Prabhu was not on the official invitation list.

The extension would immediately benefit more than 13,000 daily commuters between Borivali-Andheri who will now be able to board the Harbour line trains bound for CSMT from Goregaon.

“The Harbour line will be further extended till Borivali, which will make commuting easy for those traveling to CSMT from Western Suburbs,” Goyal said, adding the Union government has undertaken Rs 54,777 crore-worth projects for improving the railway infrastructure in Mumbai.

“Seventy locals will have AC compartments, which means around 250 to 300 services will have this facility. The proposal has recently received a nod. This would be the first time in the history of Mumbai that second class will also have AC,” said Mr Goyal. He added, “The facility will be available for first and second class, both in the general and ladies compartments.” Meanwhile, Mr Goyal also stressed that a comprehensive plan should be prepared for Maharashtra for the next 50 years.

The function was delayed by two hours on Thursday after chief minister Devendra Fadnavis missed the event.  The line was inaugurated by Mr Goyal who reached the location at 9 pm, two hours later than the scheduled time ie 7:15pm. Also, Shiv Sena workers had staged a protest during the function and disclosed that the party would boycott it. “Once the harbour services start plying from Goregaon, WR locals to Churchgate will be relieved,” said Mr Goyal.

According to Railways, nearly 7,000 commuters who travel daily from Jogeshwari, Ram Mandir, and Goregaon stations  go to Andheri to travel via the harbour line.