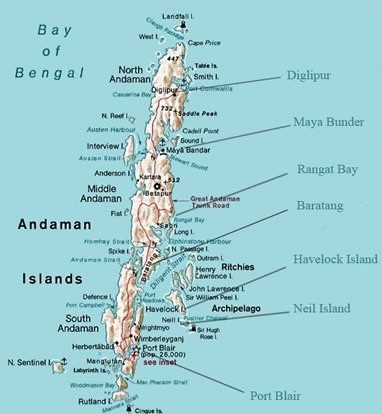 As the overland connectivity in Andaman and Nicobar islands is poised to get a boost, with the Railway Ministry green-signaling for construction of a Railway Line linking Port Blair with Diglipur, the largest town of North Andaman Island, the tourism avenues especially along the Jarawa reserve areas is going to open up anew and in the context of the jubilating fact that the number of Jarawas presently are on the rise.

Currently, travel within the archipelago is possible only by road and sea. The journey between Port Blair and Diglipur via the 350 km Andaman Trunk Road (ATR) takes nearly 14 hours, while the ferry takes a whole day. By comparison, travel via the proposed 240km broad-gauge railway line will take just three hours.

A 240-KM broad-gauge railway line connecting two major islands, with bridges and stations along the coast, will be part of an ambitious rail link connecting Port Blair with Diglipur on the Andaman and Nicobar Islands a first in the country that will bring the archipelago on the rail map.

The sea route to Baratang will provide an alternative to the National Highways-4 route that linked Baratang to Port Blair, passing through the Jarawa Tribal Reserve. This sea route will thus help promote tourism, especially that of Jarwa sighting tourism without disturbing this negrito aborigine, whose life is basically a nomadic one.

And here the statistics provided by Chief Secretary, Andaman and Nicobar Administration, Shri Anindo Majumdar requires to be mentioned. It says, the total number of Jarawas at present is 500.

However, the Union Ministry of Tribal Affairs puts the figure as 380. The A&N Administration has opened various channels of communication with the Jarawas so as to find out their present concerns as well as their future needs within the framework of Government policy, particularly the Jarawa Policy as enumerated in 2004.

This has yielded promising results in terms of the communities’ greater confidence in sharing information relating to poaching, encroachment and other forms of abuse they have had to face. Besides, in order to ensure a rich resource of forest based traditional food like wild pig, turtle, honey and fish etc, the Jarawa reserve area has been increased from 847 to 1028 Sq. kms. Exclusive marine resource base has also been increased by declaring coastal water up to 5 km from High Tide Line as tribal reserve.

According to an internal survey report of the ministry, the cost of the line will be Rs 2,413.68 crore with a negative rate of return on investment of -9.64 per cent. The Railways considers a line to be commercially viable if this figure is at least a positive of 12 per cent. But the ministry is set to approve this project owing to its “uniqueness and strategic importance”, according to documents.

The ministry’s Planning and Finance directorates cleared the project last week saying it is desirable because “it is unique, away from the mainland, and has tourism potential.”

Giving a fillip to the rail link, the Union Territory administration has agreed to share 50 per cent of the project’s operational cost — or loss.

“As soon as the line is commissioned, tourism will see a jump from the current 4.5 lakh visitors a year to around 6 lakh a year, as per our estimates. So even though the railway survey shows a negative return, our assessment is otherwise. However, we have agreed to share the operational losses, if any,” Jagdish Mukhi, Lieutenant Governor of Andaman and Nicobar Islands, told The Indian Express.

According to the UT administration, the line has tourism potential and is of “immense strategic value” to the defence forces because Diglipur is just 300 km by sea from the southern coast of Myanmar — a broad-gauge train line from Port Blair to Diglipur will take three hours at the most.

The Railways’ Planning wing has suggested that the project may be taken up as part of the strategic lines it will build for Defence ministry, such as those in the border regions of the Northeast. The Finance arm has said that it may be taken up as a national project, like the Kashmir link, in which the general exchequer is billed. The Railway Board will take a final view on this issue soon.

The initial survey for the proposed line was completed in December 2014 but the plan was dropped. Last year, the project received a fresh push when the Railways updated the survey and the UT administration said it would chip in.

Among the major tourist attractions in Diglipur are the Ross and Smith islands. “These are just two of the main attractions. Lakhs of tourists take great pains to reach there from Port Blair every year. With the railway line in place, that part essentially become a part of the capital, beneficial to tourists, local residents and the defence forces,” said Mukhi.