Ambivli Railway Station gets a new Foot Overbridge, expected to be launched as scheduled

Jan 20, 2018 Posted by Indian Railways Updates Indian Raliways News Comments Off on Ambivli Railway Station gets a new Foot Overbridge, expected to be launched as scheduled 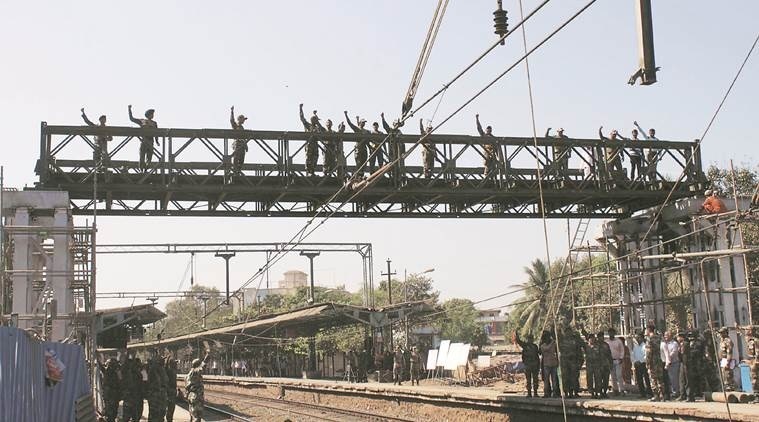 The Indian Army has successfully completed the construction of a foot overbridge (FOB) at Ambivli railway station and launched it on Thursday morning.

The civil work for the pile foundation had commenced in November 2017, while the work on the fabrication of the piers, staircase and canopy had also started at the bridging site simultaneously, read an official note.

On Thursday, the Army launched the Ambivli FOB around 11.15 a.m. Central Railway (CR) had planned a mega block between 9.54 a.m and 3.02 p.m., but the work was completed before time and the block was cleared at 2.45 p.m. “It was a perfect launch, and we are confident of meeting the deadline,” Brigadier Mohan said.  The task of building the FOBs is being undertaken by the Bombay Engineer Group and Centre, Kirkee from the Indian Army as a part of aid to civil authority for safety and smooth functioning of essential public services, it added.

The statement further noted that the FOB is planned to be complete by January 31 that will ensure safety and security of pedestrian moving across the railway tracks at Ambivli.

Ambivli railway station is a railway station on the Central line of the Mumbai Suburban Railway network. It is located on the route between Kalyan and Kasara. Shahad is the previous stop and Titwala is the next stop.

The Army started work on the project on November 20. CR organised 30 special services from Kalyan during the block and co-ordinated with civic and State authorities to organise 94 extra buses between Kalyan and Titwala, Shahapur and Kasara.

The third FOB at Ambivli was launched on Thursday, and is expected to be ready as scheduled.

“We are ready to launch the Elphinstone Road-Parel bridge on January 26, 27 and 28. These are the dates we have given to the Railways. The work is on schedule,” Brigadier Dhiraj Mohan, Bombay Sappers, said. The three-metre-wide FOB is being built as an extension of the north-end FOB of Parel station.

Mukul Jain, Divisional Regional Manager, Western Railway, said, “There will be a railway block on the night of January 26 for the work. A few services might have to be cancelled.”

Sources said the construction work could commence only by mid-December, as the alignment of the bridge and the location of the piers were finalised by late November. The initial plan was to start work by November-end. Initial designs had three piers, which had to be reduced to two due to the planned Parel terminus, said sources. The delay in acquisition of private land by the Railways has been cited as the primary reason for the hold-up at Currey Road station.

The Army was called in to build the three bridges after the stampede at Elphinstone Road on September 29, which claimed 23 lives.