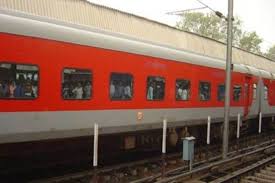 In a first, the Railways will soon roll out 15 aluminium-bodied trainsets – called Train-20 — on its prestigious Rajdhani routes that will run faster and boast of improved passenger comforts.

The aluminium trainsets – or trains like the Metro or EMUs that do not have locomotives hauling them — will not only be lightweight and energy-efficient, they will run at 160 kmph and have an automatic door system. They will have both seating and sleeper berths.

The aluminium trainsets, estimated to cost Rs 2,500 crore, will start rolling out of the Railways’ Integrated Coach Factory (ICF)/Perambur by 2020.

“A global tender has been floated inviting bids from leading international coach manufacturers for design, development, manufacturing, testing and commissioning of aluminium car body trainsets. Bids are expected to be opened next year for necessary action,” a senior ICF official, who did not wish to be named, told.

Under the bidding conditions, the first trainset of 20 coaches is to be manufactured — complete in all respects — at the successful bidder’s premises and dispatched to the ICF.

From the second trainset onwards, the successful bidder will supply the components, electrics, furnishing material, etc., to the ICF. The assembly of the trainset car body, bogie, painting and furnishing will be carried out at ICF.

There is an option to manufacture up to 10 trainsets in the successful bidder’s premises and ship them to ICF. However, the last four trainsets and spare coaches will be assembled entirely at ICF.

Covered space with a crane facility for manufacturing and storage space for material will be provided by ICF, as per the bid conditions.

A trainset is a set of coaches coupled mechanically and electrically with driving cabins at both ends and distributed traction power across the train. The acceleration and decceleration is faster in a trainset as compared to trains hauled by locomotives.

ICF expects leading global coach manufacturers to participate in the tender as, apart from the approximately 291 coaches on offer at present, the scope is so defined that the successful bidder will build a long-term relationship with the production unit.

Indian Railways will, in coming years, need a large number of trainsets beyond those tendered for, and the successful bidder will likely be an active partner in the expansion of modern rolling stock of the state-run transporter.

In order to make the train travel more joyful, all trainset coaches will be provided with on board Wi-fi, infotainment and a GPS-based Passenger Information System that will keep commuters informed of the travel status.

The trainsets will have plush interiors and diffused LED lighting. The toilets of these coaches will be fitted with zero discharge vacuum-based bio-toilets and touch-free fittings.

Currently, the ICF is executing the manufacture of 16 trainsets designed by in-house talent under its Train-18 programme. The first trainset under the Train-18 plan is expected to roll out by May next year.

While the Train-18 coaches are of stainless steel and meant to run on intra-day, inter-city Shatabdi routes, Train-20 coaches will be of aluminium and aimed at the day-night Rajdhani service.

While Train-18 coaches will only have seating arrangements in its AC Chair Car and Executive Class, Train-20 will have both AC seating and sleeper berths required for overnight journeys.