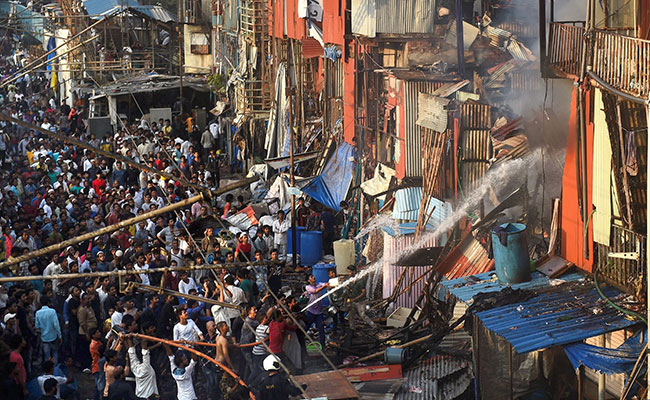 At the Behrampada slums in Mumbai’s Bandra, thousands of families spent the night in the open, some by the railway tracks as locals whizzed past them. A huge fire that broke out yesterday in the slum swallowed their houses, leaving them homeless.

Among them is 90-year-old Amina Qureshi, perched on a stool, she’s staring at the rubble that was once her house. When we asked her if she had somewhere to go, Ms Qureshi said, “Where will I go? I’ll be out in the open. I don’t even have my medicines with me.”

Ms Qureshi’s 32-year-old grandson Anwar blames Mumbai’s civic body BMC for Thursday’s tragedy. Even after the fire was put out, what remains of their house is still smouldering.

“The BMC came and served us a notice yesterday and asked us to vacate the homes. And then this morning they landed with bulldozers and with a lot of force. Then a cylinder blast happened. The BMC doesn’t care whether we sleep on platforms or out in the open,” said an angry Anwar.

Shakeela Khan and her five children are now homeless and their belongings completely gutted. They are hungry and nowhere to go.

She said, “Much of our belongings were lost in the fire. We can’t even cook anything.”

70-year-old Najmunissa was at work in south Mumbai when she heard of the demolition drive and rushed home. Distraught, she said, “I could not save anything I could only save my life. We don’t have a home. Will they give me a home now?”