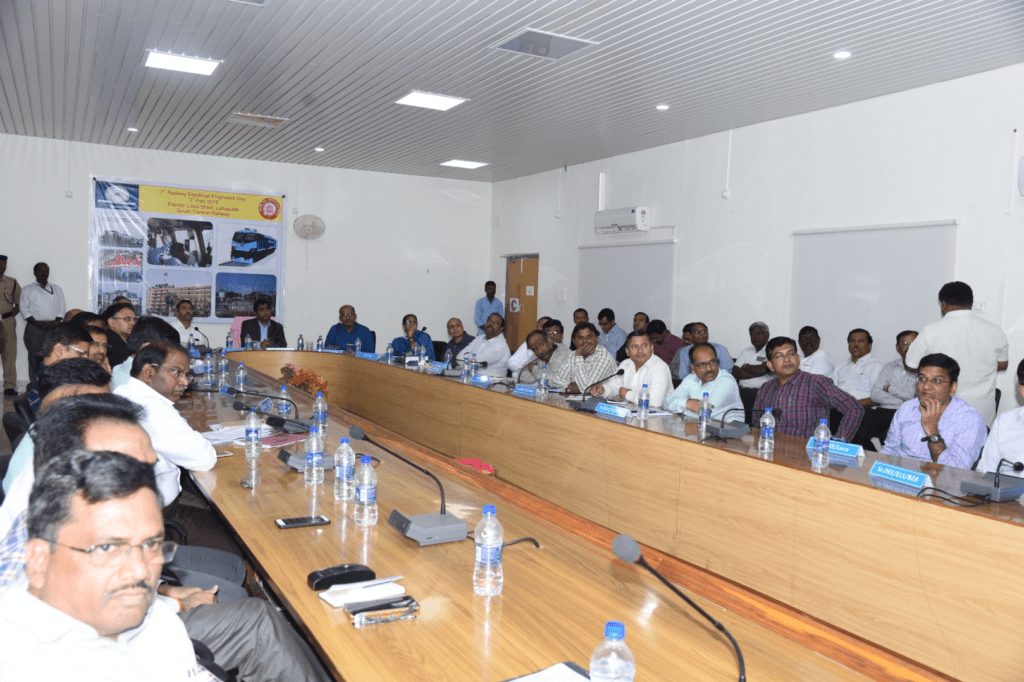 The Electrical Engineers Day is celebrated as a mark of its remembrance for the 1st ever electric train was run on 3rd Feb, 1925 from Boribander (Now known as Mumbai CST) to Kurla on 1500v DC on Great India Peninsula Railway.

Speaking on the Occasion, Shri Vinod Kumar Yadav stated that Electrical Engineering has got bright future ahead in the Railways as the emphasis is laid in the recent Budget for Railway Electrification all over the Railway network. The General Manager stated that the Hon’ble Minister for Railways and the Chairman, Railway Board are taking positive view for the introduction of semi Hi-Speed trains and Hi- Speed Trains Network. He also appealed to the Officials of Electrical department to rise to the requirements of large scale railway electrification projects and ensure timely completion from concept to commissioning. SCR is placed at top position over Indian Railways in terms of achieving Energy conservation awards continuously for three years with the efforts made by Electrical Department and should maintain the same in forth coming years, he added. The General Manager also visited the Electric Loco Shed, interacted with the staff and planted a sapling in the premises.

Earlier, Shri John Thomas, Additional General Manager spoke on the occasion and said that Electric Engineers have to face the challenges ahead to achieve the targets of electrification projects completion.

Electric Loco shed Lallaguda was constructed as a part of Vijayawada – Balharshah Railway Electrification project at a cost of Rs. 25 crore including the Machinery & Plant with a designed homing capacity of 100 Locos. The shed was inaugurated on 06.09.1995.The shed has started with initial holding of 72 Locomotives comprising of WAM4 & WAG5 for hauling Passenger and Goods Trains. Subsequently higher Horse Power Express locos of WAP4 class were inducted at the end of year 1995. The state of Art technology Three phase locos are inducted in May 2007.

At present the shed has a total holding of 211 Locomotives including 101 coaching locos. The shed is operating 93 express loco link including prestigious trains like Rajdhani, Duranto, Sampark kranthi express trains.

The present holding is as shown below

The loco maintenance wing is divided into main sections headed by a Senior Section Engineer and assisted by junior supervisory staff to monitor and improve various maintenance schedules and modification works carried out in the section. A locomotive nominated for maintenance is first received by the PPO section and dispatched out through the same section after completion of the maintenance.

The role played by the other sections namely, Traction Motor, Bogie, Auxiliary Machines, Electronics, SPM and Relay, TFP & GR, Pneumatic, Technical, Tool Room, Machine Shop, General and Store section is vital in completing the process. In a nutshell, it is a comprehensive team effort that keeps the wheels on the move.

WAP4 Loco No: 22313 of Electric loco shed Lallaguda adjudged 3rd best out of more than 20 locos in All India basis competition of Crew Friendly Cab Modification contest organized by Ministry of Railways in April’03.

Innovation proposed by ELS/LGD on modification of End Hanger Assembly of brake rigging of WAP4 locomotive was chosen as second best innovation in Indian Railways by Railway Board for the year 2006-2007 and sanctioned a cash prize of Rs. 2,00,000/-.

GM special group award of Rs. 25000/- was declared to ELS/LGD for its excellent performance during 2010-11 among Zonal level.

Outage: The coaching and goods outage for the last 05 years with current year are given below:

Statistical Ineffective: The Statistic ineffective details for the last 02 years with current year are given below:

1.To avoid dropping of slack adjuster assembly (bottom) in case of breakage of its Split cotter pin in WAP7 locos, ELS/LGD proposed provision of hexagonal head bolt with plain washer and castle nut in place of slack adjuster pin with split cotter pin. The item was discussed during 37th MSG meeting and accepted by Railway Board. RDSO issued Modification No. MS 441 for this arrangement to all Zonal Railways.

3.ELS/LGD proposed to remove anti spin valve and associated double check valve in brake system of three phase locomotives since they are not in service. This was proposed by SCR in 37th MSG meeting and accepted by Railway Board.RDSO issued Modification no. MS 447 to all Zonal Railways.

5.ELS/LGD has highlighted the problem of non availability of C clearance of MSU which is leading to MSU failures in 3phase locos. Accordingly RDSO issued modification no.456 Rev’0′ dt:9.1.17 for Modification in drawing of supporting ring to achieve adequate ‘C’ Clearance in MSU assembly of 6FRA-6068 TM in WAG9/WAP7 class of locomotives.

6.ELS/LGD proposed to review MOH schedule periodicity of WAG9 locomotives from 18 months to 24 months.During decisions on recommendations of 61stESC Railway Board accepted the proposal and RDSO vide letter no. RDSO Lr No. EL/3.6.1/1, Dt.19.10.16 had issued Revised MOH (TOH) schedule for WAG9 for 24 months.

Converter coolant pumps which are received in M/s BHEL make IGBT Traction Converter locos are of magnetic coupling type and having high failure rate. The cost of the pump is high (Rs.12,98,903/-approx) and the maintenance time is also high. ELS/LGD has explored indigenous market and developed a converter coolant pump through M/s Flowwell at the cost of Rs.1,10,548/- and achieved effective cost saving of Rs.11,88,355/- percoolant pump( RS.23,76,710/- per loco approx). This was accepted by Railway Board & RDSO in 38thMSG meeting.

10nos. Battery operated cordless impact wrenches procured this month for the usageof staff working on various equipment of the locomotive. These wrenches operate at 1.8 Volts for the sizes from M12 to M20 and deliver torque up to 650 Nm. These electrical portable wrenches arelight in weight and easy to operate. They can be used for tightening/loosening bolts of Axle boxes,Transformers, Gear cases etc.

TOBACCO DAY.  Dr. Anjaiah. MD, Dr.Sunil. Chest Physician and Dr.Padma. Family planning In  charge from Railway Hospital, Lallaguda have participated in this campaign and given presentation on the health hazards of active and passive smoking. The meeting was attended by the officers, supervisors and staff of ELS/LGD.

15 days special drive to joint check of pantographs with TRD staff and to check and ensure condition of roof equipments (including pantographs, cleaning of roof insulators and roof bars etc.,) in electric locos from 28-12-2013 to 11-01-2014.So far 5 locos covered under this drive.

During this month 5.08 Million units of Energy was regenerated by 51 three phase locos (locos visited the shed), which was 12.61 % of the energy consumed by them.v