May 1, 2018 Posted by Indian Railways Updates Indian Raliways News Comments Off on 3rd Rail Line between Rourkela-Jharsuguda continues to hang fire due to protests by land encroachers 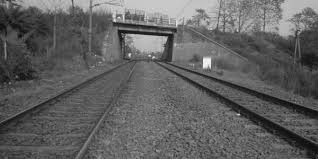 More than two years after its foundation was laid, the third rail line project between Rourkela and Jharsuguda on Chakradharpur Division of South Eastern Railway on the busy Howrah-Mumbai main route continues to hang fire due to protests by land encroachers.

With the encroachers enjoying support of political parties, the Sundargarh district administration is quietly dragging its feet while South Eastern Railway (SER) has stopped activities on the disputed stretch of 5.5 km between Malgodam area and Panposh in Rourkela.

The foundation for the 101-km project worth `969 crores was laid at Rourkela by Union Minister of State for Railways Manoj Sinha in March, 2016. The Union Minister had claimed that the project would be completed in four years and said the proposed Dedicated Freight Corridor (DFC) between Kharagpur and Mumbai would pass through Rourkela.

Sources said SER has been seeking 25 metres (about 82.5 feet) from Rourkela-Birmitrapur track centre for the third line project. About a year back, 42 families were evicted from near the Malgodam level-crossing and notices were served twice to 875 more households for encroachment. However on both the occasions, local Congress and BJP leaders opposed the eviction drive demanding rehabilitation of the land grabbers.

In December 2017, local BJP leaders led by Union Ministers Jual Oram and Dharmendra Pradhan had met Railway Minister Piyush Goyal and held discussions on eviction for the third line project. The BJP leaders had suggested to clear an area of 60 feet from the track centre to minimise the impact of eviction besides rehabilitating the affected families comprising about 4,000 persons.

It is learnt that after a considerable project delay, SER has started construction of the railway bridge over Brahmani river at Panposh while earth work at several stretches from Kalunga towards Jharsuguda has commenced.

Sources said laying of the third line from Howrah has been completed at many places and work is underway at remaining areas of SER jurisdiction. With the Howrah-Mumbai route witnessing an annual rail traffic growth of eight to nine per cent, the third line has become inevitable now.

The local administration should help in evicting the encroachers, he added.Incidentally, progress of other projects including construction of a washing line, setting up of sixth and seventh platforms and further development of Rourkela railway station has also slowed down due to encroachment issues.