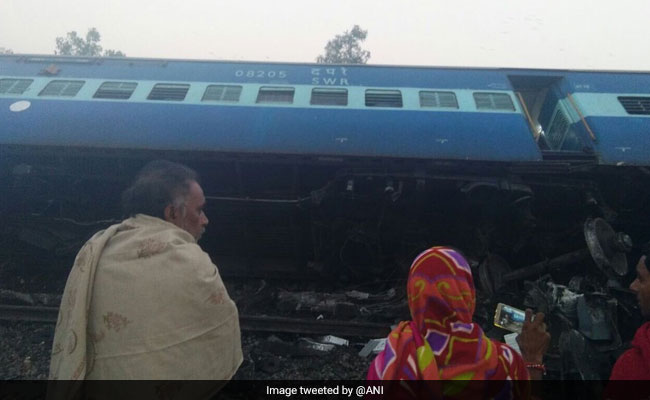 Three people were killed and at least nine persons left injured after a Patna-bound train derailed near Manikpur railway station in Uttar Pradesh early this morning, police said. Thirteen coaches of the Vasco Da Gama-Patna Express derailed at 4.18 am after it left the Manikpur station, less than 12 hours after a Bolero jeep collided with a passenger train near Lucknow killing four and injuring two.

Railway Minister Piyush Goyal has ordered an inquiry into the incident and announced a compensation of Rs. 5 lakh each to the family of the dead, Rs. 1 lakh for those with grevious injuries and Rs. 50,000 for the injured. “Immediate rescue and relief operations started and an inquiry ordered into the derailment of Vasco Da Gama-Patna Express at Manikpur, UP. My sincere condolences to the families of the deceased,” Mr Goyal said in a tweet.

Uttar Pradesh Chief Minister Yogi Adityanath also conveyed his sympathies to the families of the victims and wished speedy recovery to the injured. The chief minister also declared Rs. 50,000 each to the seriously injured and Rs. 25,000 to those who suffered minor injuries.

The train derailed soon after leaving platform number 2 of the Manikpur Railway Station, about 250 km from Lucknow, officials said.  The train hadn’t picked up speed which is why the casualties were not heavy. Chitrakoot Superintendent of Police Pratap Gopendra Singh said a man and his six-year-old son from Bettiah district of Bihar died on the spot while the third person died at a hospital. Two of the injured are said to be serious.

Anil Saxena, Railway spokesperson, said medical relief is being provided to the injured. “Patients have been admitted to Manikpur and Chitrakoot Hospital and Railway Minister Piyush Goyal has been closely monitoring the situation. Ashwani Lohani, railway board chairman, has been asked to rush to the spot,” he said.

Railway officials are on the spot and investigating the reasons that led to the accident. According to Additional Director General (Law and Order), Anand Kumar, fractured railway track could have derailed the coaches. “Another possible reason being cited is that due to some technical problem, emergency brakes were slammed, causing the derailment,” he said, adding that it can be confirmed only by railway authorities. The Uttar Pradesh government has asked the Anti-Terrorism Squad (ATS) to probe the tragedy, the ADG said.

Exactly a year ago, over 100 people were killed and nearly 200 injured when 14 coaches of the Indore-Patna Express jumped the rails near Kanpur. The number of deaths due to train accidents has already reached over 200 this year, the highest in a decade.

Earlier in August, about a dozen carriages of the Puri-Haridwar Utkal Express ran off the tracks in Uttar Pradesh’s Muzaffarnagar. At least 23 people were killed and more than 70 injured in the accident. A few days later, over hundred people were injured when 10 bogies of the Kaifiyat Express derailed in Auraiya district of the state.

Former Railway Board chairman AK Mittal had resigned taking responsibility for frequent train accidents. Ashwini Lohani, the former chairman of national carrier Air India, replaced him as the new chief of the board. The then Railway Minister, Suresh Prabhu, had also offered to quit, but was told to wait by Prime Minister Narendra Modi.